2019: The most read/watched stories of Christian persecution

From violent killings in Sri Lanka and Burkina Faso to intensified oppression and arrests in Algeria and China, our Christian brothers and sisters endured life-changing persecution for their faith in 2019. Each one reminds us of the connection we share; the urgent need to pray and support our global family; and the truth that God is working in ways we can’t see or fathom. Below are the most widely read/watched stories of Christian persecution (in order of when they happened/appeared in 2019) you engaged with on Open Doors’ website and social media.

Research for the 2019 World Watch List showed that more than 245 million Christians faced persecution during the 2018 reporting period—up 30 million from the year before. North Korea was the No. 1 most dangerous country for Christians for the 18th consecutive year, and India cracked the top 10 for the first time—shining a spotlight on intensifying and violent persecution in the world’s second-most populous country.

2. Modern Day Paul: ‘I planned to kill him; Now I’m prepared to die for Jesus’

From persecutor to follower of Jesus—Mostafa set out to kill his newly converted cousin and avenge his family’s honor. What he found was new life. The two young men now live in secrecy—live like thousands of believers in Egypt and the Middle East whose families see their conversion to Christianity as a betrayal of their family and tribe.

3. Worst attack on Christians in Asia in recent history

On Easter Sunday, the world was shocked as news that terrorists had bombed three churches during Easter services and three hotels in Sri Lanka. More than 300 people were killed; 176 children lost one or both parents.

4. They refused to denounce Jesus—pastor, 5 others shot after church service in Burkina Faso

The church in Burkina Faso was targeted and attacked throughout 2019 with this story offering a vivid picture of both the heinous persecution and powerful faith we saw in the lives of Burkina Christians.

Militants surrounded a church during a choir practice and then attacked—representing the ever-increasing insecurity facing Nigerian Christians and giving us a vivid picture of the risks that Christians in persecuted areas face to do something as simple as participate in a choir practice.

6. 95 Christians killed in Mali attack—‘No one was spared’

The stories of persecuted believers around the world came front and center in Washington D.C., as thousands of Christians gathered for the second annual Ministerial to Advance Religious Liberty

8. Iranian official: ‘Mass conversions are happening under our eyes’

As Iran was repeatedly in the headlines throughout 2019, we were reminded that inside the Islamic country is a rapidly growing church of Muslims coming to Christ—so rapidly Iran’s government leaders acknowledged the exponential growth.

9. These are the children Boko Haram wants to put in suicide vests

An on-the-ground report from a Nigerian village repeatedly attacked by Boko Haram drove the sobering reality of the depths of evil in persecution. And a powerful reminder that the spiritual battle we’re in is real and happening now.

10 This is what persecution in action in Algeria looks like

Millions watched the video of Algerian church members and their pastor as police interrupted a worship service, manhandled worshippers and beat the pastor and others. The video captured the attack on one of three church closures in Algeria in two days—part of what Open Doors called a “systematic campaign” against the church in North Africa. Watch the video below:

11. Chinese pastor Wang Yi sentenced to prison for 9 years for preaching the gospel 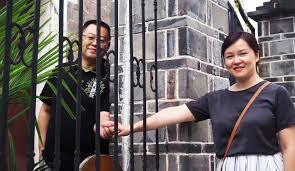 The sentencing of Early Rain Covenant Church founder and Pastor Wang Yi is the latest incident in China’s ongoing crackdown on Christians.

Arrested a year ago in a police raid on his church, in late December Early Rain Covenant Church Pastor Wang Yi learned he would spend the next nine years of his life in prison—giving us yet another picture of the increasing persecution the world’s largest church is facing as they walk into an uncertain future.

Stand with your persecuted family

Today, Christians all over the world are pressured, arrested, attacked or killed for their faith. Through your gift, you can provide your persecuted family with critical support and emergency relief. Give today and join the largest on-the-ground network of support for persecuted Christians in the world—because we are one Church, one family.