Pray for Christians in northern Nigeria under siege. The story we’re reporting is extremely difficult to hear and tell. But it offers an accurate and clear picture of the brutal violence, evil and grief Christians are facing because they have chosen to follow Jesus.

Our field is reporting the execution of a 22-year-old college student from Plateau State. On Jan. 9, Daciya Ropvil Dalep, a Christian, was kidnapped by Islamic State West African Province, along with with others as he returned to northern Nigeria after the Christmas break. 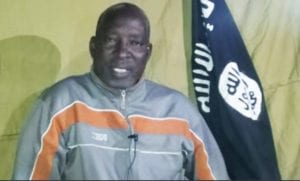 Rev. Lawan Andimi was a husband, father of nine children and a senior leader in the Christian Association of Nigeria (CAN).

ISWAP released a video of his execution shortly after news of the beheading of Nigerian church leader, Rev. Lawan Andimi, a senior leader in the Christian Association of Nigeria.

Reportedly, Daciya was executed by a young boy. The video of his death shows an armed young boy, believed to be around 10 years old, standing behind Daciya.

ISWAP, a splinter group from Boko Haram, has affiliated with Islamic State, which routinely uses young children—called “cubs of the Caliphate”—to carry out the killings of prisoners in propaganda videos.

A message to Christians

In recent months, both ISWAP and Boko Haram insurgents have notched up kidnappings and attacks. Rev. Lewan’s kidnapping and death comes only a couple weeks after Boko Haram attacked a Christian village in Borno State near Chibok on Christmas eve, killing seven believers and taking a teenage girl—the second attack on the village in 2019.

Days before that attack, ISWAP executed 11 Nigerian Christians over Christmas 2019 and released a video on December 28 reminiscent of the 2015 video of the beheadings of 21 Christians on the Libyan coast.  In both videos, the martyrs wore orange jumpsuits, their killers in black.

“This message is to the Christians in the world,” ISWAP said in the 56-second propaganda video.

Every day, 8 Christians killed for their decision to follow Jesus 10 Dangerous Myths About the Persecuted Church Islamic State claims to kill 11 Christians at Christmas Kidnapped Nigerian church leader executed only 18 days after abduction

Stand with Christians under attack

Today, in places like Nigeria, Christians around the world are under attack, pressured, arrested or killed for their faith. Through your gift, you can provide your persecuted family with critical support and emergency relief. Give today and join the largest on-the-ground network of support for persecuted Christians in the world—because we are one Church, one Family.

With reports of kidnappings, attacks and executions coming in almost daily, sub-Saharan Africa has become increasingly violent for Christians. Research for the 2020 World Watch List shows Islamization in this area as one of the major trends in persecution over the last year.

The violence gives way to what Open Doors is calling, “a wave of Islamist influence backed by money, weapons, drugs and organized crime spreading across Sub-Saharan Africa.”

Of the 2,983 deaths of Christians reported during the year-long 2020 World Watch List reporting period, well over half of Christians killed and churches attacked were in sub-Saharan Africa. In Nigeria, Central African Republic (CAR), South Sudan, the Democratic Republic of Congo, and Burkina Faso, 2,476 Christians were martyred for their faith—1,350 reported in Nigeria alone. In Nigeria, Christians are targeted by Fulani militants, Boko Haram, ISWAP and a range of armed criminal groups that attack Christian communities and churches, kill, kidnap and rape with little-to-no consequences.

Daciya Ropvil Dalep and Rev. Andimi put faces on horrifying World Watch List statistics as two of the 87 Christians abducted each month for their faith and one of the eight Christians killed every day for following Jesus.

They also remind us, as the apostle Paul tells us, that “we do not wrestle against flesh and blood, but against the rulers, against the authorities, against the cosmic powers over this present darkness, against the spiritual forces of evil in the heavenly places.”

Please pray. The darkness is real.

Every day, 8 Christians killed for their decision to follow Jesus

10 Dangerous Myths About the Persecuted Church