3 Major Factors Driving the Crackdown on the Church in China

December 20, 2018 by Lindy Lowry in Stories of Persecution

With the recent raid on one of China’s largest underground house churches resulting in arrests of more than 100 Christians and reports that police now have quotas for arrests of Christians, along with foreign trade negotiations, China and leader Xi Jinping have been all over the headlines. Major news outlets have increasingly reported on what is now being called a widespread government crackdown on religion in China (including Christians and Muslims). Below, we examine three major factors driving this persecution.

Christianity in China (#39 on the World Watch List) has always lived in tension. Though the Communist Party of China has habitually restricted the freedom of Christians to worship over the last 70 years, the skyrocketing growth of the Chinese church is impossible to miss.

But even last year, the Christian church in China didn’t perceive the government as a great threat. Indeed, theologian Dr. Richard Mouw wrote earlier in 2017 that “[local religious leaders] do not see President Xi Jinping as hostile to Christianity as such.”

However, in the last few months, we’ve seen numerous developments that represent what is now being referred to as an all-out “widespread crackdown” on church leaders and churches throughout China. Most recent is the Early Rain Covenant raid in which the church’s well-known pastor, Wang Yi, and his wife were arrested on subversion charges and taken away.

Not since China’s Cultural Revolution led by Mao in Zedong has the church in China seen this level of persecution.

What is driving this intensifying crackdown and how can Christians around the world pray for their sisters and brothers during what appears to be the emergence of a new paradigm for Christians in China? Here are three major factors: 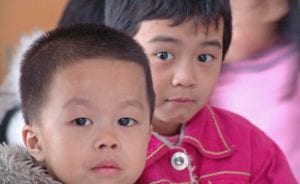 One of the most disturbing regulations is the new announcement in some areas that children are not allowed to attend church services.

In fall 2017, China announced it had officially adopted new religious guidelines, aimed at curbing “religious extremism.” In February 2018, the laws went into effect. Since then, religious persecution, including both Christians and Muslims, has escalated to a level of persecution few saw coming. The new regulations include “guidelines on religious education, the types of religious organizations that can exist, where they can exist and the activities they can organize.”

How those regulations have played out so far, among other things:

2. THE INCREASED CULT OF PERSONALITY AROUND XI JINPING

Xi Jinping serves as the current general secretary of the Communist Party of China and president of the People’s Republic of China. He assumed office in late 2012 and continues to increase his power. In October 2017’s meeting of the Communist Party Congress, Jinping was granted another term and the party put his policies into the Chinese constitution, granting it the same level of authority in the country as former Chinese leader Mao Zedong. “Xi Jinping Thought” has now been introduced as a guiding force for China. The New York Times reported the action “sent a clear signal to officials throughout China that questioning Mr. Xi and his policies would be ideological heresy.”

In the lead up to the Congress, World Watch List (the Open Doors research unit) analyst Thomas Muller said the elevation of Xi’s thought fits into a pattern of increasing restrictions on religion.

“The preferred line of thinking is emphasized by introducing President Xi Jinping’s own brand of ‘political thought’ into the Party constitution, tying ideology closer to the budding personality cult around him,” Muller explains. “Fitting into this pattern is a book recently published by the Central Party School, demanding that all students learn from President Xi’s experiences as a teenager during the Cultural Revolution.

“As the emphasis on Communist ideology and the personality cult emerging around President Xi gets stronger, the authorities will correspondingly act more strongly against all other ‘ideologies’ not fitting into this system, including the Christian religion.”

3. THE POSITIONING OF XI JINPING AND THE COMMUNIST PARTY AGAINST JESUS AND HIS CHURCH 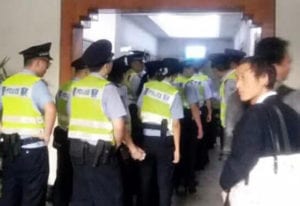 Police line up before raid of Early Rain Covenant Church.

Last November, The Washington Post  ran a chilling report (Nov. 14, 2017) from southeastern China: Thousands of villagers were told that Jesus can’t help them with illness or poverty, and only Xi Jinping can, so they should remove religious images and replace them with pictures of Xi.

Another report in the South China Morning Post quotes Qi Yan, chairman of the Huangjinbu people’s congress: “Many rural people are ignorant. They think God is their savior … After our cadres’ work, they’ll realize their mistakes and think: We should no longer rely on Jesus, but on the party for help.”

The increasing cult of personality around Xi (he’s even been referred to in the press as “Great Leader”–terminology not used since Mao Zedong’s rule) and the emphasis on poverty eradication by the Communist Party has led to China may positioning itself and its leaders against Christianity.

A year ago, these trends were still in their infancy. In October 2017 before the religious regulations went into effect, Open Doors published a report, “3 Troubling Developments Facing Christians in China.” Today, these factors are in full force in negative ways few predicted. The church in China needs our prayers and encouragement to stand strong. Conversely, we can also learn from these stalwart Christians like Pastor Wang Yi who are now risking their lives to stand up against what Yi called “the Chinese Communist Party’s persecution of the church, the deprivation of human faith and the freedom of conscience.” Two days after his arrest, church members released an open letter from Pastor Yi that he wrote in September. He gave specific instructions to release it if he went missing more than two days.

In it, he stressed that he is willing to be part of God’s plan to use persecution to bring others to Christ: “If God decides to persecute the church by the Chinese Communist regime, to help more Chinese despair, lead them to experience the disillusionment and desert of faith, and thus to know Jesus and to constantly cultivate and build His own church. I am very happy to obey God’s arrangement, because his arrangement is always loving and beautiful.”

God has given the global Body of Christ the privilege and responsibility to get on our knees and join in fervent prayer around the church in China. While Christmas tends to be a time when we see greater persecution from the state and extremist groups, the situation in China is likely to continue to escalate as the Chinese Communist Party increases its power and focus on Chinese nationalism, says Open Doors CEO David Curry.

“There will be even more pressure on the Body of Christ in China,” Curry said. ”The government is trying to force out unregistered churches. Those churches that are registered, they approve sermons, these kinds of things, slowly turning up the heat and making it a ‘Chinese’ church, not a church of Jesus.”

Praying with Believers in China 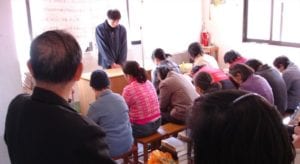 Recently, one of our indigenous ministry partners who works to equip church leaders in China offered this insight: “The situation on the ground [in China] is always changing. Don’t be too quick to jump to conclusions about what China needs. Pray for wisdom for the leaders. Pray with us.” She shared specific prayer needs for church leaders and churches in China:

We”d love to keep you informed. Sign up to receive stories and news from persecuted believers in China and around the world.