In the last month alone, our brothers and sisters in the North Kivu Province of the Democratic Republic of Congo (DRC) have endured a string of at least 10 attacks by the Islamic extremist group (Allied Democratic Forces). Reportedly, the attacks have killed at least 84 people, including men, women and children. Our field has confirmed that more than half (47) were Christians. At least 13 people are missing, thought to be kidnapped.—including a 16-year-old girl,

Reportedly, most losses occurred after the government launched Operation Sukola 1, an effort to dislodge Allied Democratic Forces (ADF) forces from the area.

But the operation has come at great cost to the mostly Christian population with at least 10 attacks since the beginning of the month. The ADF—one of several extremist groups supporting Islamization—is known to carry out atrocities, such as murder (including children), rape, abduction of women and children and subsequent, slavery and/or indoctrination.

Pastor Gilbert Kambale, president of the Beni city civil society organization, has called on Christians in North Kivu and elsewhere to keep praying and looking up to God for deliverance for Beni and the DRC.

“Even as the night is long, day will surely dawn,” Pastor Gilbert remarked. 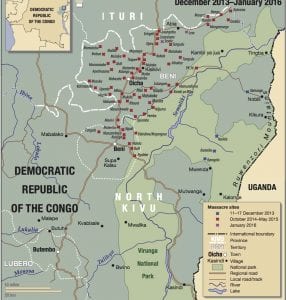 To help you understand what the last month has been like for our brothers and sisters in this area of Central Africa, below we share a rundown of the attacks that started Nov. 5 and continued over the next three weeks.

The DRC lies in central Africa and is one of the largest countries on the continent. With 80 million hectares of arable land and over 1,100 minerals and precious metals available, it is also extraordinarily rich. Its wealth is one of the main reasons that violence and turmoil make up so much of its history.

Over the past few years, reports have surfaced about persistent violence against the mostly Christian population in the northeast of the DRC. The security situation is very complex because of the many different groups involved, a few of which support an Islamic expansionist agenda.

During a visit last year, Open Doors workers learned the situation has not improved at all and that the atrocities committed against our brothers and sisters are causing displacement, poverty, desperation and very many health and psychological problems. The violence has also negatively  impacted church life.

Our family in the Congo needs our prayers and support.