As Ramadan Begins, Egypt’s Christians Reflect on Tragic Year But Resolve to Be Light in Darkness

[Above: Villagers attend a series of evangelistic meetings in south Egypt.]

This May, Ramadan–the annual time of 30 days of fasting and prayer–begins for the more than 1.8 million Muslims around the world. For our brothers and sisters in Egypt, the month marks a different anniversary. Just over a year ago (April 9), twin suicide bombers attacked two churches on Palm Sunday followed by May’s deadly ISIS attack on a busload of Christians headed to a monastery in the Minya region and a Christian family (a dad and his two sons) in a truck also traveling to the monastery.

Families of martyrs killed in the bombing of Saint Mark’s Cathedral share photos of their loved ones.

Reportedly, when passengers on the bus were told to “either recite the Islamic shahada creed, live as practicing Muslims or be killed,” they began to pray. And the more they prayed, the angrier their attackers got.

“We told them that we are Christians and we will die as Christians,” said one of the survivors.

In April and May in 2017, an estimated 128 Christians in Egypt died for their faith with countless others injured. And in the last year, Egypt’s streets flowed with the blood of more than 200 Christian martyrs.

Now Egypt is about to enter into the time of Ramadan. How has Egypt’s Christian community continued in the year since the bombings—and how can they cope during Ramadan, traditionally a difficult time to be an Egyptian Christian? As in many Muslim-majority countries, people who don’t follow Islamic customs are more likely to stick out during Ramadan.

In past years, Christians have been able to leverage Ramadan as an opportunity to show kindness to their Muslim neighbors — setting up public, pre-dawn breakfasts to feed those observing the fast. But as Islamic State’s call for attacks on Christians grow in frequency and vitriol, the security risks for Christians in Egypt have become more acute; risks which were made horribly manifest last Palm Sunday.

For Christians in Egypt, an already tense time has become even more stressful. Josef, a Christian living in Egypt, wrote about his experience last year during Ramadan: “Today, while driving in the midday heat, I had to look around to see if anybody was watching me before I could quickly drink some water … .”

And yet, the attack could have been much worse—the suicide bomber was stopped from getting inside the church by a security guard named Naseem, who prevented the man from killing many more. It was the last thing Naseem ever did, as the resulting blast took his life, leaving behind a wife and two grown sons.

“I am proud of what my husband did, but life has become hard for me after his death,” says Naseem’s widow, Samira. “He was everything in my life.”

“Naseem’s life was at the church, and now his life is in heaven,” she continued. “I know he is in a good place.”

This is what Samira says to herself and to her church. But she has a different message for those who took her husband’s life: “I forgive you, and I ask God to forgive you. I pray that God may open your eyes to enlighten your minds.”

The Opportunity of Persecution

Many Christians in Egypt share this merciful sentiment. Though ISIS’ murderous cries are only growing louder and the very real threat of violence is only growing sharper, churches in Egypt continue to see persecution as not just a tragedy, but also an opportunity.

The week after the Palm Sunday attacks, Egypt’s churches were swarming with increased security as Christians gathered for church again. Saint Mark’s Cathedral in Cairo was guarded by a large mix of police officers and soldiers, with three metal detectors at the entrance. It was, of course, Easter Sunday.

A local church service in Egypt last April only a week after the Palm Sunday bombings.

It was not difficult to find honest expressions of pain and sorrow among Christians that Sunday.

“We don’t feel any joy this Easter,” a Christian named Fathy Anwar told Open Doors. “All of us are very sad about what happened to our brothers and sisters in Tanta and Alexandria. We pray for the families of all who were martyred in these two church bombings that God comfort all of them.”

But the spirit of love, solidarity and forgiveness was easy to see as well. So much so that a well-known Muslim blogger in Cairo named Fatima Naout wrote to Christians: “I admit, I hear you in your churches praying for Egypt, for its Nile, for its president and for its Muslims, even before its Christians. I admit you take care, in your ministries, of our poor Muslim children as you do with yours also.”

She continued: “I admit that you love all people without condition.”

Fatima is not alone. A group of Christians in southern Egypt chose to put small boxes of food together for Muslims observing the daytime fast. One Christian who went door-to-door handing out these boxes related the story of one man they visited, who said, “You are good people. I don’t understand how you come to help us when we are different than you. You show us a love and respect that we don’t see from anybody else.”

“When we visit these people and show them God’s love, we feel the heart of Jesus,” the Christian man continued.

This is the legacy of terrorism in Egypt. Death and horror, yes, but also forgiveness and love. These are the people who have been turned into widows and orphans by violence. They are overwhelmed by sadness, but determined to press forward. And these are the things they hear from others, who watch them continue to manifest grace in times of boundless violence and loss.

Lighting the Darkness During Ramadan 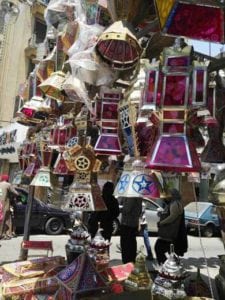 In many parts of the world, the coming of Ramadan is marked by the lighting of gorgeous lanterns. The practice is said to have originated in Egypt, and during the month, the streets are a wash of lovely, vivid colors. These fanous, as they’re known, are a decorative way of welcoming Ramadan—not unlike Christmas trees or Easter eggs.

And although Ramadan is not a time of celebration for Christians in Egypt, it is a time of lanterns. God’s light shines through Egyptian churches even in times of darkness and oppression, lighting the way for others to see them by. In fact, the persecution of Christians has inspired them to shine all the brighter. As one Christian pastor in Egypt said, “ISIS is the greatest preacher for Christianity in the world.”

That truth doesn’t make the persecution any easier to endure, but it does inspire Christians in Egypt to live boldly.

“I am sure Naseem was happy to give his life for Christ,” says Samira. “He told me that he knew me and the kids needed him but that he also knew that God would take care of us if something might happen to us.

“When we talked about this one day, he said that he would be willing to defend the church with his own blood.”

That’s what he ended up doing, and more Christians may lose their lives yet to terrorism and oppression. But the fear churches in Egypt feel over such persecution is mixed with faith.

“Maybe tomorrow a bomb will explode in our church, you never know,” says Mina, a 23-year-old Christian in the country. “It doesn’t withhold me from going. It would be an honor to die for Christ. As human, I can be afraid, but I know that God can protect me if it is His will.”

Over the next month, from May 15 to June 14, please join us in praying for Muslims during Ramadan and our brothers and sisters in Egypt where threats of violence are heightened. To help you pray, we’ve created a free 30-day prayer devotional filled with powerful Scripture and moving stories.

This article first appeared in the spring issue of Presence magazine. Open Doors is on the ground in more than 60 countries to meet the rising tide of Christian persecution. Join us and stand with your brothers and sisters in Christ.