When Poh* shared with his parents that he had become a ’believer of God’, his father threatened to kill him. His confession set in motion a series of persecution incidents that Poh says he’ll never forget. Like thousands of secret believers in Vietnam, he and his family have risked their lives to walk with Jesus.

As the deer panteth for the water

So my soul longeth after Thee

You alone are my heart’s desire

And I long to worship Thee

Our jaws drop as Poh*, a persecuted believer in north Vietnam, opens his lips to belt out an a cappella and impromptu version of the familiar worship anthem.

It is a song he loves to sing every Sunday as part of his church’s choir, often during the opening of his church’s worship service. “This song encourages me,” he tells us, “that the Holy Spirit is with me to encourage me to be near to God.”

Poh sings with the joy and passion of someone who has sat at the feet of Jesus, someone who has risked and suffered much for his Savior. We soon learn this couldn’t be more true.

‘My father threatened to kill me’

Though we had originally planned to visit this young husband and father of two in his village, early COVID-19 lockdowns meant that he would have to come to us. He graciously traveled 14 hours by bus to share his story with us face-to-face.

In the area of Vietnam near the Chinese border where Poh lives, Christian converts are secret believers, because when they reveal their new faith, especially to their family, discrimination, threats and violence often follow. Leaving the village religion is seen as a betrayal to family and tribe. In Poh’s case, he’s part of the Hmong people group. His village worships dark spirits and persecutes anyone who leaves the community faith.

He remembers the first time he told his mother and father, “I am a believer of God” – six words that would change his life.

“On that day, my father threatened to kill me,” he says.

‘I knew I still loved Jesus’

We can’t show the face of this secret believer, but it’s not an exaggeration to say that Poh beams with a countenance you rarely see. He wears a wide, irresistible smile that draws others to him. Throughout the two days we’re with our brother, that smile doesn’t fade.

He is only 20, but Poh has already seen a lot of life, both pain and joy. He openly tells us about everything he has walked through—before and after accepting Jesus as his Savior.

Poh grew up watching his family regularly practice religious rituals, offering livestock, like chickens, cows and even buffalos, to the devil. But as a child, the rituals didn’t mean much to him. He’s quick to say he remembers growing up afraid of the devil.

His introduction to the gospel came via his wife, Mai*. When they met in school Poh was 15. Mai was already a Christian. After they married, he moved in with his new bride’s family—a critical turning point for him.

“When I got away from my family, I decided to accept Christ,” Poh says. “The Holy Spirit helped me know that I didn’t want to go back to my old ways of worshiping the devil.”

Poh kept his faith a secret, hidden from his parents. But when children entered the picture, the new father knew he couldn’t be silent anymore.

“My parents said, ‘Now that you have your children, you must offer sacrifices to the devil so they won’t get sick.’”

But Poh said no.

That’s when the firestorm hit. Immediately, Poh’s father gathered all the family relatives and villagers to force his son to renounce his faith. Wanting to please his father and fearing for his life, Poh obeyed. But in his heart, he says, “I knew I still loved Jesus.”

Pray with Poh and his family and believers in Vietnam

A year later, after separating from his parents in an attempt to lead his own family, Poe took the bold step of sharing his faith again. He even told his parents he was now part of a church and that he was regularly attending worship services each week with his wife and her family.

Almost immediately, the same scene that had taken place the previous year started to unfold. Once again, Poh’s father gathered his relatives and the chief of the village to force his son to renounce his faith. From 8 pm to 3 am, they taunted, mocked and pressured him. An uncle even tried to force him to drink a bowl of blood pudding (raw blood that’s served as part of religious rituals in his tribe).

The situation grew more violent. At one point, someone tried to tie him up. “My father picked up a rock to throw at me. The other people around were trying to stop my father from killing me,” he recalls.

But this time, Poh stood firm.

“I knew in my heart I would not publicly renounce my faith again,” he says.

Finally, some seven hours later, the village leader gave Poh three days to think about his decision. Poh and Mai knew it was a choice that would change their lives. They would likely not be able to see Poh’s family again. They would be banned from the village, abandoned by the people they grew up with, including family and friends. During those 72 hours, he and Mai prayed, asking God to show their family what to do—and to protect them in the aftermath.

When the three days were up, they decided they wouldn’t come back. When Poh stood his ground, his father again came at him. This time, instead of “renounce or die,” the family patriarch took a financial tack, demanding his son pay him 10 million dong (US$434). Poh didn’t have it. “I told him I would still follow Christ,” Poh says.

The attacks intensified. One incident even involved police from the surrounding communities. His father called Poh again, and as soon as he arrived, his father and an uncle attacked him. Some officers let them act with impunity. Others tried to stop the violence, reasoning with Poh: “If you don’t renounce, your father’s going to try to kill you.”

Another time, his father grabbed his hands and tried to drag him away. “I didn’t know what he was trying to do,” Poh says.

‘He’s the One who loves me’ 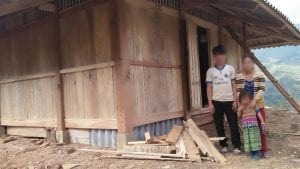 Thanks to your support, Open Doors was able to work with Poh’s church to buy land and help his family build a home.

Poh hasn’t seen his father since the attacks – the last one was about a year ago now.

Looking back at each vicious and hurtful incident, he says he was thinking more about his faith than the fact that his own father was threatening to kill him.

“I thought, ‘That’s fine as long as I can keep my faith because I know where I’m going if I die. Maybe it will be a sacrifice for the sake of God’.”

Open Doors has provided persecution preparedness training for Poh, thanks to your prayers and support —an experience that continues to empower and equip him to stand strong in his faith.

“I learned that it’s not just me who is persecuted because they follow God,” he says. “There are also other Christians who are in the same situations for the sake of the gospel.”

Now he understands the reason why his father and family persecute him: “Because they don’t know God.”

He says, “My prayers for my parents and my family is that one day they will accept Jesus Christ.”

He offers encouragement to other persecuted believers: “My prayers for all those who are in the same situations as me is that they will stand strong in their faith.”

Poh and his family now live in the village where his in-laws live. Thanks to your support, Open Doors was able to work with his church to buy land and help his family build a home.

“I am thankful for this house,” he says. “It gave us a home we can call our own where we can continue to follow Christ, where we can pray and read the Bible to our children.”

The smile on the face of this young follower of Christ grows even wider as he says, despite all that he’s been through, he feels thankful and happy. “I praise God for His continued protection over my family and me. Thank you to everyone who has helped me and my family. I’m very thankful for the supporters who continue to remember me and my family in their prayers. I pray for blessings from God above for you and your families.”

Persecution is still a constant in his life. He doesn’t know when his father, brothers or any other family member will do something to avenge what they see as betrayal. And like so many, Poh’s family has struggled during the COVID-19 crisis. Because he couldn’t go out to farm or look for work, food has been scarce for his family.

Poh’s understanding of what it means to join in the sufferings of Jesus continues to deepen.

“He’s the One who loves me,” he says. “I can say that my faith has been growing stronger than ever before.” Poh is an example of the transformation that happens when God’s people step into the stories of our brothers and sisters. He used to worship the devil. Now, he follows Jesus through the fire.

Poh finishes the song, his hands and eyes lifted up, as if no one else is in the room.

You alone are my strength, my shield

To You alone may my spirit yield

You alone are my heart’s desire

And I long to worship Thee.

‘Pray I Never Give Up,’ Says Displaced Vietnam Evangelist

Being Hmong and Standing for the Gospel in Vietnam

‘They dragged me out of my village’: A story of horror and hope in Vietnam

Why This Bible Smuggler Risks His Life in Vietnam