February 9, 2021 by Christopher Summers in Asia

The camera lens homes in, mapping the man’s face—measuring the space between his eyes, the distance between the nose and mouth, the angle of his cheekbones, the shape of his chin. Instantly, that data is converted into a string of numbers or points, called a “faceprint.”

His face is recognized, compared with tens of millions of photos of faces in a database. His identity is confirmed. And he doesn’t even know he has been “detected,” “recognized” and “tracked.”

You’ve seen the images in movies. Many of us willingly submit our “data” every day, holding up our phone as the operating system algorithm detects, identifies and recognizes our face.

This is the mass AI technology that China has developed. And it is one of the most powerful surveillance tools—and Christian persecution tactics—ever made, especially when you consider that the country has installed millions of these cameras on streets, in public venues, on university campuses—and churches.

Reports from counties in Henan and Jiangxi provinces say cameras with facial recognition software are now in all state-approved religious venues.

China maintains it moved decisively to contain COVID-19 after the virus took flight in Wuhan, but for the country’s 97 million Christians, the cost in heavy restrictions—as surveillance reached into their homes, online and off-line interactions were tracked, and their faces were scanned into the Public Security database—is high.

Reports from counties in Henan and Jiangxi provinces say cameras with facial recognition software are now in all state-approved religious venues. Churches that have refused to install these cameras have been fined raided and even banned, like the 1,500-member Zion Church in northern Beijing.

In April 2018, Zion Church, one of the Chinese capital’s largest house churches, received a letter from city officials asking them to install 24 surveillance cameras in their sanctuary for “security reasons.”

“The church decided this was not appropriate,” Zion Church Pastor Ezra Jin told Reuters. “Our services are a sacred time.”

After the church refused, state security officials and police began to harass churchgoers, contacting their workplaces and asking them to promise not to go to church. In August 2018, authorities threatened to close Zion Church because they refused to install the cameras. A month later, officials banned the church and confiscated materials.

Zion leaders understood what the government was asking. Reportedly, many of these cameras are installed next to standard CCTV cameras, but they link to the Public Security Bureau, meaning artificial intelligence can instantly connect with other government databases. The facial recognition software will eventually be linked to China’s “Social Credit System,” which monitors the loyalty of citizens with regards to the tenets of communism. With 415 million surveillance cameras and counting, the state has the infrastructure and legal framework to pressure religious minorities in both direct and indirect ways we’ve never seen before.

And these potentially detrimental systems are spreading beyond China.

Through your gift today, you’ll help believers around the world as they experience persecution for following Jesus. From coming alongside churches and Christians in China, to providing trauma care in Nigeria, to secret projects in countries we can’t disclose, your gift strengthens the Church to stand for Jesus. 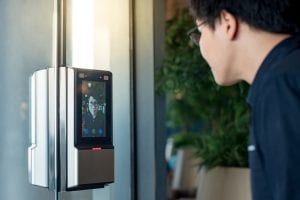 As China’s global influence grows, the country is exporting its all-pervasive systems for “protection” and “security” inside the country. This is perhaps most on display in China’s brutal oppression of the Uyghur population in Xinjiang, but it’s used elsewhere in China, as well.

This ability to export this kind of data has many international observers worried. In July 2020, Democrats on a committee in the U.S. Senate put together a report that accused China of “digital authoritarianism.” In the report, the authors show how Uzbekistan (No. 21 on the 2021 World Watch List) has expanded surveillance in its capital city with the help of Chinese surveillance technology in an effort to “digitally manage political affairs.” Given that the Uzbek government systematically targets churches, it’s easy to imagine how this investment in surveillance might have a chilling effect on religious freedom.

A month after the Senate’s report released, The Washington Post published an editorial in August 2020 highlighting the report and showing how China is using technology to target minority populations. The editorial board writes:

“The Senate report explores how China assembles ‘multi-modal’ biometric portraits of individuals, drawing on data such as DNA samples paired with tools such as facial recognition—and then uses omnipresent cameras, smartphone apps and more to sort people into categories, track their movements and even take preemptive action against those considered threats.”

According to a report from the Brookings Institution, China’s efforts to spread their technology has expanded to places like Pakistan, Laos and Saudi Arabia, all countries on the 2021 World Watch List (and to be fair, their technology has also spread to countries like France and Germany). Though the surveillance technology raises troubling questions about individual liberty and freedom, for Christians, the technology itself is as dangerous as the government that wields it.

Open Doors CEO David Curry shares insight into what this kind of technology, combined with pandemic restrictions, means for Christians. “The COVID pandemic has been used as a justification to exact religious terror,” Curry asserts. “The interconnectivity of technology, in the hands of evil actors, has massive human rights implications for everybody with a smartphone.”

China’s work to tighten their control over minorities has been concerning for years—and it’s even more concerning that they are exporting this control to more and more places, including where Christians are targeted because of their faith in Jesus.

During the release for Open Doors’ 2021 World Watch List, Chris Meserole, a foreign policy expert with the Brookings Institution, said that Beijing has now honed its ability to track people in private.

“What’s never been possible before, really, is a surveillance technology that enables the regime to ban private forms of religion,” he said. “Even the private messages and communications that people have, or what they say in their home. Or banning and effectively enforcing the ability of religious communities to meet in private, maybe not in a public church but in someone’s house. And on top of that, they’ve also got this incredible array of geolocation data so that if you are trying to meet with certain folks in private, they can actually figure that out and begin to unwind some of those private religious communities, too. When that’s paired with existing tracking systems, the government can build a frightening level of detail about where people have been and what they’ve been doing.

It’s a new technology, he said, that we have never seen before used in this way. “If we’re concerned about religious freedom, we should really be taking it seriously.

This year marks the 100th anniversary of the founding of the Chinese Communist Party, which Christians believe will worsen conditions. “We anticipate the government will exert even stronger control over all aspects of society for the sake of stability,” Caleb says. “Local churches will have to stay very low-profile and be more adaptive and creative in the way they do meetings and ministries.”

‘It’s time for us to prepare’

It is against this backdrop that Open Doors has moved quickly to strengthen the persecuted church through persecution preparedness training, small group discipleship training, youth ministry and youth leadership training, and presence ministry.

Your prayers and support are helping Open Doors provide this practical training to equip believers in China as they prepare for rising persecution. Peony*, the director of Open Doors’ work in China, says, “It is vital that we stand with Chinese believers during this difficult season, to encourage them and strengthen their faith.”

Caleb*, an Open Doors worker, adds, “It is our mission to help the churches rediscover their precious spiritual heritage. We want to see Christians in China stand firm and strong under persecution through God’s grace and power. We want to see a vibrant, persevering church that will not bow to the enemy’s schemes. This is our dream.”

Chinese churches have responded by asking the Open Doors community to journey with them.

“This is an awakening! Thank you so much for this great learning opportunity,” one sister shared after attending training from Open Doors. Her husband had been imprisoned for distributing Bibles in the past, and she experienced persecution on many occasions. “I used to experience a lot of persecution. While my life has become stable, my spirit has become less alert. This training is very timely. It’s time for us to prepare, as persecution is escalating in different areas in China. I will pass on my learning to other brothers and sisters.”

Chinese church leaders vow: ‘When one is arrested, another will pick up the work’