As I sat in a church sanctuary in Beijing, I noticed the cameras. They were just over my shoulder—their cold lenses recording my every move.

I knew in churches like this one all over China, these cameras were silently watching. They could be in the back of the sanctuary, the pulpit, above the congregation—wherever was best to see and note each person there to worship Jesus.

On my recent trip to China, I saw hundreds of cameras on a simple stroll around Beijing. I wasn’t surprised to read a report that China has more than 415 million public cameras (CCTVs)—and that it’s possible there may be over 2 billion CCTVs on the streets in the next few years.

You might be wondering: Why is China monitoring its people—and its churches? And why might Christians have something to fear from this constant surveillance?

China is No. 23 on the 2020 World Watch List. Its score on the list has risen steadily over the last five years, contributing to its high rank; it was No. 43 on the list just two years ago.

The government’s tightening on the Christian community in China—an estimated 97 million people—is real and happening right now. Every once in a while, the Chinese government will arrest some pastors, or shut down churches, or do something aggressive like take down crosses from steeples. But more often, the way they squeeze the church is quieter—and perhaps deadlier.

Their primary fear is that Christians who follow Jesus have a greater allegiance to Him than the Communist Party— and they want to squeeze the life out of that allegiance. There are other things happening in China that suggest the surveillance in churches could be just the beginning. 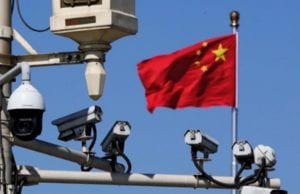 A recent report estimates there are 415 million cameras like these throughout China’s streets and churches.

China has developed an incredibly technologically advanced system to help them keep tabs on Chinese citizens they deem a threat to the state. Their facial recognition software means they can use their CCTV network to pinpoint and identify individuals—and there were recent reports of China requiring all cell phone operators to collect more face scans, which, of course, the government would have access to.

Then there’s the social credit system, first introduced in 2014 and planned to be fully in place in the coming years. The credit system tracks individuals and assigns them a “score,” based on if the government and other citizens approve of them and trust them. That score can then determine how and if Chinese citizens are able to travel, whether they can be approved for loans and more.

And perhaps most chillingly, the Chinese government has already shown what it looks like when they decide a religion is a threat. The government has maintained a notorious series of “re-education camps” of Chinese Muslims in northwest China. Many of these camps are little more than brutal detention camps dedicated to eliminating the culture—and religion—of the Muslims there.

It doesn’t take a big leap of imagination to see how this vast network of surveillance and control could be used against Christians. After all, Christians are followers of Jesus, and He doesn’t fit nicely with a government that requires allegiance to a Communist state above everything.

So, what if they decide Jesus followers are a threat?

More about Christian persecution in China

‘We will lose the next generation of Christians’: Inside China’s war on youth 3 Major Factors Driving the Crackdown on the Church in China Will the world’s largest church survive amid growing hostility and oppression? Chinese pastors decide: ‘When one is arrested, another will pick up the work’

A vast network of control

There are increasingly signs that is the case. Recently, an Open Doors team met with a group of church leaders in central China—within 24 hours of their leaving home, the leaders’ families had called to warn them that police had been looking for the pastors, wondering where they were and why they weren’t responding to calls.

Other pastors who are well-known or who have known links to the West are monitored. All Christians know to be careful of what they say on Chinese social media because they know it’s being monitored. Children are forbidden from attending church under the age of 18. The Bible is no longer available online.

As I sat in that church in Beijing and sang worship songs under the camera, I thought about the millions of people who follow Jesus like this every day. If I had to worship in a place where I knew, at any time, I could be monitored and singled out because my faith in Jesus meant I didn’t kneel to the state … how would that impact my faith? How would it impact yours?

It’s something that should guide our prayers as we think about God’s people, living and worshiping in China. I hope you’ll join me in praying for and supporting our sisters and brothers in China in 2020 and beyond.

Top photo: David Curry sits in a registered church in Beijing, China, as a surveillance camera in the background monitors everything happening in the church.

Stand with Christians in China and throughout the world

Today, Christians all over the world are pressured, arrested, attacked or killed for their faith. Through your gift, you can provide your persecuted family with critical support and emergency relief. Give today and join the largest on-the-ground network of support for persecuted Christians in the world—because we are one Church, one family.

3 Major Factors Driving the Crackdown on the Church in China

Will the world’s largest church survive amid growing hostility and oppression?

Chinese pastors decide: ‘When one is arrested, another will pick up the work’