As many as 50,000 Christians in China lifted their voices to the heavens at the Golden Lampstand Church in Linfen, China (#43 on the 2018 World Watch List, #WWL2018). Now, that seems like a long, long time ago. 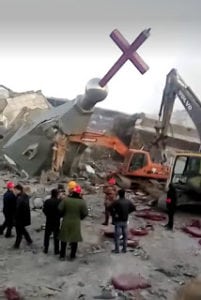 As of Tuesday, Jan. 9, the well-known megachurch, which reportedly was built with nearly $3 million in contributions from local worshippers in one of China’s poorest regions, was a pile of dust and rubble after Chinese paramilitary forces reportedly used excavators and dynamite to destroy the church, and with it, the hopes and dreams of many believers in the area.

According to ChinaAid, a watchdog organization that keeps track of religious freedom in China, the police faction that destroyed the church reports to some of the country’s highest officials. China’s military police has been under the direct control of the central government since the head of the public security bureau, which previously commanded it, was arrested last year–indicating that the order to destroy the church came from China’s top officials instead of the less-powerful local authorities.

A Warning to Local Congregations

The attack underscores rising tensions between Chinese officials and Christians. In November, Open Doors reported on three troubling developments facing Christians in China and last month reported that in several areas of the country, Christmas celebrations were banned or highly discouraged. The destruction of the megachurch undoubtedly serves as a warning to local churches, as revised religious regulation will be implemented very soon. The revision provides the registration opportunity for unregistered churches. However, more and more local churches worry about the increasing restrictions after registration. The religious regulation covers restrictions on religious venues, religious activities, religious education, religious donations as well as involvement of overseas groups in local religious activities.

This newest persecution incident, directly from the government, is nothing new for the congregants of Golden Lampstand or most Christians in China.

During its construction, the church, led by evangelists Wang Xiaoguang and Yang Rongli, was the target of a brutal raid in September 2009, when hundreds of police and hired thugs attacked church members at the construction site, ransacked the building, seizing Bibles, and later arrested and imprisoned church leaders, according to a report from ChinaAid. At the time, church leaders received long prison sentences, charged with illegally occupying farmland and disturbing traffic order by getting together, according to state media. Yang Xuan spent three-and-a-half years in prison, and Yang Rongli spent seven years there. Yang Xuan’s wife was sentenced to two years in a re-education labor camp where she was beaten.

Yang Rongli told ChinaAid, describing the destruction:  “ … the police surrounded the Golden Lampstand Church. Patrol wagons guarded the church. Workers smashed the church’s glass. At this point, excavators are digging into the church, but we are not allowed to enter or watch. The village head and the police from the local police station warned all the believers against entering the church. Now, we really have no idea what is going to happen.”

One of China’s state newspapers, the Global Times, called the church an “illegal building” in a report released Jan. 10, and said the demolition was part of a campaign to remove illegal structures in the city.

While it’s legal to be a Christian in China, the government keeps a close watch on religious activities, and many Christian communities and leaders have been increasingly targeted. Most of China’s estimated 97 million Christians worship in private, hoping to avoid interference by the Communist Party.

Many churches, like Golden Lampstand, do not register with the government, and many have been destroyed. Just last month, the government demolished a Catholic church in Xi’an, one of China’s historic cities, bringing protests from more than 100 church members.

As reported by Open Doors in 2015, government officials tore down more than 1,200 crosses and destroyed a number of churches in Zhejiang Province, saying they were illegal buildings.

Praying with believers in China: