‘Your actions are worthy of death’—Iran judge tells Christian converts

“Who set this low bail amount for you, so you could be free to roam about on the streets?”

On October 17, 2020, four arrested Christian Iranian converts stood in a courtroom, accused of acting against national security by forming a house church. 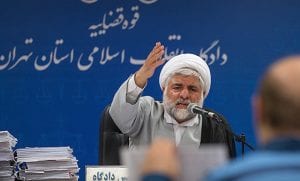 photo: Mohammad Moghiseh has earned the nickname the ‘Judge of Death’ for his harsh treatment of prisoners of conscience. (Photo: Fars/Ali Khara)

As Judge Moghiseh—known as the “Judge of Death” for his harsh treatment of prisoners of conscience—spewed hatred, he told the believers, ““Your actions are worthy of death!”

Iran is No. 4 on the 2021 World Watch List. See the other 49 countries on the list ranking the most dangerous places for Christians.

Refusing to listen to their defense, citing only the intelligence agent’s report, he increased their bail to 7 billion tomans ($220,000).

Unable to pay, Mehdi Akbari, Fatemeh Sharifi and Simin Soheilinia were sentenced to 10 years in prison and Mehdi Roohparvar five. A combined 35 years in prison.

Until now, little was previously known about their case, other than that Akbari and Roohparvar were both being held in Ward 4 of Tehran’s Evin Prison, known as Iran’s “torture factory.”

Now, Persian-language website humanrightsinir.org, which first reported the arrests, has chronicled their difficult journey—offering a vivid illustration of how Christian converts from Islam to Christianity are unfairly treated in Iran’s legal and penal systems.

The two women were later freed on bail, but the men were transferred to Evin Prison where, for the first time, they finally heard they had been sentenced to prison and would spend the next five or 10 years behind bars.

13 Christians murdered for following Jesus—every day The 10 most dangerous places for Christians ‘I Can’t Live Without Jesus’—Pastor Tells of God’s Power in Iranian Prison ‘In an Iranian Prison, God Used Me—and a Muslim Imam—to Bring Others to Him’ ‘When They Come to Take Mom Away’—Preparing My Daughter for Persecution in Iran 3 more sentenced Christians flee Iran—‘We pray for the rulers who tortured us’ “In the six months I was [in prison], they executed 20 people” —Believer from Iran

Writing in a time of great persecution for Christ followers who had lost property, been thrown into prison, were ostracized from their Jewish community, etc., the author of Hebrews offers a clear call to prayer for those who are suffering for the gospel:

“Continue to remember those in prison as if you were together with them in prison, and those who are mistreated as if you yourselves were suffering” (Heb. 13:3).

And in Matthew 25:34-36, Jesus is clear that when we enter into the suffering of others, we are answering His call:

“Come, you blessed of My Father, inherit the kingdom prepared for you from the foundation of the world: for I was hungry and you gave Me food; I was thirsty and you gave Me drink; I was a stranger and you took Me in; I was naked and you clothed Me; I was sick and you visited Me; I was in prison and you came to Me.”

Jesus is strategically building His Church throughout the word, in the face of persecution, and exhorts us to stand with and encourage our brothers and sisters as they live out and spread the gospel.

top photo: Outside the gates of the notorious Evin Prison outside Tehran.

Pray with Iranian prisoners and their families

Father, we come to you interceding for our brothers and sisters, their families and their churches. We thank You for their commitment to share Your story and to lead others to know You, as well. Please continue to protect them as they await their verdicts. Give them Your peace that transcends their understanding, as Your Word says. God, give them boldness and discernment to continue to stand for You and lead Your church. Ultimately, we pray for the release of those in prison and for the overturn of their convictions in these appeal hearings. In Your Son’s name we pray…