Only hours before Iranian-Assyrian Christian Shamiram Issavi was due to begin her five-year prison sentence for participating in a house church, she and her husband Victor Bet-Tamraz reportedly have fled their homeland of Iran. Since Victor’s arrest three years ago, Open Doors has asked our community to pray with this couple as they face the reality every Christian in Iran knows could be them the next day. 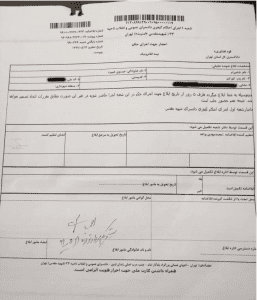 The couple’s daughter, Dabrina, told Article18 that her parents are “safe and well” and are determined to continue their legal battle against their combined 15-year prison sentence.

Dabrina, who now lives in Switzerland, has spoken repeatedly of her fears for her senior parents’ safety, should they be forced to serve time in prison, especially as reports of coronavirus in Evin Prison continue.

Victor will celebrate his 66th birthday next month, and Shamiram turns 65 in December.

Since their sentencing, the couple was summoned to countless appeal hearings, only for them to be cancelled for a variety of reasons including the court being “too crowded” and the assignment of a new judge to the case. Their last scheduled appeal hearing on June 1 was cancelled without excuse.

“We continue to pray and hope for their sentences to be dropped,” Dabrina said. “We pray for justice both for my parents and for all the believers suffering in prisons.”

Last Tuesday, August 11, Shamiram received word that her appeal had been rejected and an official summons to begin her five-year sentence at the country’s infamous Evin Prison—known as “Iran’s torture factory.” Three weeks earlier, Victor’s lawyer called, telling him that his appeal against his 10-year prison sentence had been rejected.

Article 18 reported that the couple, who are both in their mid-sixties, decided with heavy hearts to leave their homeland and continue their legal battle abroad.

Dabrina added that her parents are determined to return to Iran if they can overturn the unjust prison sentences against them.

Guilty of ‘participating in a house church’

‘I Can’t Live Without Jesus’—Pastor Tells of God’s Power in Iranian Prison ‘When They Come to Take Mom Away’—Preparing My Daughter for Persecution in Iran 114 Christians Arrested in One Week in Iran “In the six months I was [in prison], they executed 20 people” —Believer from Iran A Modern Day Paul in Iran Exclusive Interview: What Life Is Like For A Persecuted Christian In Iran Iranian Christian sentenced—’I and my family were forced to endure all kinds of torture’

The officers told them they were participating in an “unlawful and unauthorized gathering” and forced them to fill out forms. They filmed them as they explained why they had gathered.

After several hours of filming and interrogation, the agents arrested Victor, Amin Afshar-Naderi and Kavian Fallah-Mohammadi and transferred them to Evin Prison where they were held in solitary confinement for 65 days.

Three years later, the converts were eventually sentenced alongside their pastor and a third convert, Hadi Asgari, in July 2017— found guilty for their participation in “house churches.”

Victor, Kavian and Hadi were sentenced to 10 years in prison each and Amin to 15 years for their participation in “house-churches.” The Revolutionary Court found all four men guilty of “action against national security by organizing and conducting house churches.”

Shamiram was sentenced to five years in prison in January 2018, six months after her husband and the three converts received their sentence.

The case against the five Christians has dragged on for so long now, and been the subject of intense international scrutiny including pleas for clemency by Vice President Mike Pence, among others.

Open Doors has learned that the three converts, Kavian, Hadi and Amin, have also been notified by their lawyers that their appeals have been rejected. They now face combined sentences of 35 years.

Victor and Shamiram’s difficult decision to leave their country comes with high stakes and great sacrifice—their home, their community, their friends. It’s a vivid picture of the desperation Christians in Iran feel—and the level of risk believers face for simply participating in a house church.

Life is not easy for Iranian refugees. They are often ostracized and because they don’t have official citizenship documents, they are unable to find work or earn any income. They are often treated as “outsiders.”

A Modern Day Paul in Iran

Exclusive Interview: What Life Is Like For A Persecuted Christian In Iran