Christians are digital targets—new report shows how bad it is

For years, Wheat Christian Bookshop in China’s Taizhou had operated relatively freely. Customers could browse for Christian books and purchase the materials with little consequence. In 2019, however, the bookstore was raided by authorities. Citizens who had made purchases online from the shop were suddenly questioned by police, even when purchases were made a decade earlier. The owner of this bookshop, Chen Yu, was sentenced to seven years in prison for operating an “illegal business.”

Wheat Christian Bookshop’s story is a familiar one, not just in China, but all over the world. In a world where 5 billion people have access to the internet, technology has become a new arena for persecution. The bookstore raid would have been impossible without widespread digital surveillance. Today, governments and extremists can monitor believers without their consent and, in extreme cases, attack Christians.

This unprecedented reality is reflected in a new report published by Open Doors UK and Ireland, in partnership with the University of Birmingham and the University of Roehampton. The report, Digital Persecution – The New Frontier for Freedom of Religion or Belief, details multiple human rights abuses against religious minorities, all perpetrated via technological abuse in different countries. It also outlines specific steps that governments, the international community and tech companies can take to reduce digital persecution.

The report focuses on three main tools of digital religious persecution: surveillance, censorship and disinformation. While extremists generally use the latter, governments carry out all three. Each poses a significant danger to religious minorities in many countries.

In recent years, many nations have implemented the surveillance technology necessary to track their citizens. The most common surveillance methods include:

China has led the way in the widespread use of surveillance technology, accounting for 54% of the world’s CCTV cameras. The country aims to achieve 100% video surveillance across the country and has implemented “smart management,” integrating surveillance with systems that can monitor entire groups of people. 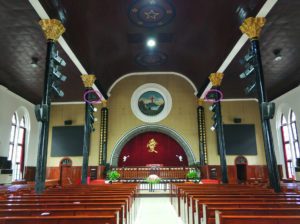 Surveillance cameras in a government-approved church in China

In a speech to the Digital Persecution Conference in March 2022, Rahima Mahmut of the World Uyghur Congress shared how China’s surveillance had impacted her family. It had been a few months since Mahmut had last talked with her brother, a Uyghur Muslim in Xinjiang, China. Wanting to catch up, Mahmut called her brother, but was surprised when he did not answer with the traditional Islamic greeting. She knew he was deeply committed to Islam and would not neglect these greetings.

“Leave us in God’s hands,” he told her. Since that conversation, Mahmut has not spoken with her brother.

Later, Mahmut learned why she didn’t receive the traditional Islamic greeting: It is one of many keywords that alerts Chinese voice recognition software. Once registered, the speaker is assessed a threat level that can impair their transportation, employment and general livelihood. In conjunction with a robust facial recognition program, surveillance in Xinjiang and across China is making it difficult for many people to follow their religion.

In Pakistan, censorship has placed additional dangers on Ahmadi Muslims, who already face significant risk as non-Muslims under the Pakistani Constitution. 2020 saw the Ahmadiyya Muslim Community’s television channel, a prominent part of the Ahmadi community, subjected to regulatory measures from the government. The Pakistan Telecommunications Authority (PTA), not the courts, has relatively unchecked authority to remove online content if it is deemed to violate the law. Social media, WhatsApp and major Ahmadi websites are censored, and there are multiple Ahmadis imprisoned for their online activities.

In China, Bible apps and Audible have been removed from Google’s and Apple’s app stores. Likewise, a popular Christian website was shut down completely. Christians have sought other means of accessing Scripture online, but this has become increasingly difficult and dangerous.

Disinformation is the communication of deliberately misleading or biased information, the manipulation of narrative or facts and propaganda. Examples include: A woman holding a smartphone with a Christian app

Disinformation can also be used by extremists, jeopardizing even people outside the reach of the central government. Since early 2020, in India and Myanmar, religious minorities have been accused of spreading COVID-19. Stories of Christians receiving aid have also been perpetuated, making them unlikely to receive government aid.

Sukumar was a teenager in India, a Christian who was in the wrong place at the wrong time. In 2020, several people in his village died from water contamination. Local Hindu nationalists, however, said that they were caused by Christian witchcraft. In the middle of the night, Sukumar was abducted and brutally murdered. Even after his dismembered body was found, local news outlets continued to report that witchcraft had killed the locals.

National officials also regularly incite and encourage disinformation against Christians in India. Christians are accused of forced conversions and cattle slaughter and people who are “destroying Hindu culture.” Videos of ordinary prayer gatherings can be painted as anti-Hindu meetings, and false allegations of forced conversion circulate like wildfire. All of this mobilizes the community against minority Christians and can lead to violence.

What can be done?

The report recommends immediate and significant response from national governments, as well as international institutions. Digital persecution is happening on a massive scale and requires a proportionally massive response. Corporations should also commit to upholding basic human rights by clamping down on persecution on their sites and protecting their users from government infringement, or by refusing to do business with those who persecute.

In a foreword to the report, Sam Brownback, Open Doors USA Fellow and former U.S. Ambassador-at Large for International Religious Freedom, writes: “Responding to these emerging threats by standing up to defeat these digital forces of authoritarianism could prove to be a defining moment for countries who value freedom and human rights. We have done it before and we must do it again now, confronting this expansion of the virtual police state wherever it arises.”

Stand with your family in prayer

Why Christians should care deeply about human rights violations in China