COVID-19 relief in India: ‘If you had not come today, we would have taken our lives’

Pastor Samuel* is our leading partner in providing relief to thousands of believers in India struggling because of the coronavirus crisis. Every day, his team hears the pleas of believers who have lost their jobs and have nothing to eat due to the lockdown. And every day, he sees God’s hand at work. He remembers one believer, after receiving food aid, telling his team: “If you had not come today, we would have taken our lives.”

Here, Pastor Samuel shows us how God is using your prayers and support to bring life-saving aid to this Hindu nation’s most vulnerable people through our local partners on the ground in India.

India has carried out some of the world’s strictest COVID-19 lockdowns. What is happening in the country as a result?

The repercussions of the sudden shutdown is that millions—hundreds of millions—of people there who used to work in the macro cities, urban cities, and suburban areas in the factories, in the multinational companies, and suddenly lost all their jobs. And because they lost their jobs, they will not have any sustainability there to live in those cities.

So within two or three days, they started going back to their villages because they thought that at least, when they go back to their villages, they would find something to eat. And because everything was shut down, many people walked thousands of kilometers to their homes. That created another level of scarcity across the country.

How has the lockdown affected the church specifically?

At the grassroots level, or in suburban cities, most of the church is comprised of daily laborers. And when they lose jobs, they are going home. The pastors, they lost their income from the church, or the tithes, that they used to receive. Everywhere, the Christians are even discriminated against when receiving the government-provided food packets. And suddenly, this has become a big crisis across the country for the Christians and the persecuted Christians, especially since there is no help or support for them.

And because we have a good network among those areas—the rural areas and suburban areas—we learned that there are thousands of families there that are without food. So we started this campaign, this relief distribution work. In the past days, we decided to distribute at least 8,000 food relief kits to 8,000 families. And we are nearly about to achieve that, most probably because when we are going there, connecting with them, we see the enormous need to support them, especially in terms of their future livelihood, their income generation.

So we are planning in the coming days to not only provide the food packets but also stable sustainability, job procurement, skill development and income generation.

You say you’re helping about 8,000 families, which is wonderful. What would happen if you couldn’t reach them? What would be the impact on a single family if they weren’t reached with this kind of relief aid?

This is terrible even to think of. And we know that with you guys praying, we will be able to reach them.

One lady who has been chased out of the village, even the husband and in-laws have rejected her. Her husband has left her in the last seven years. She has grown-up children, and she has no means of survival, no food at home. She was wondering how she can support her children. Suddenly, one of our partners, he came to her doorstep and told her that he brought this food kit for her. She was crying, saying:

“I really thank God! You see my tears. I don’t know how you got to know that I need this so much. If I hadn’t gotten this, me and my children wouldn’t have survived. It’s so difficult.”

In another case, suddenly one of our local volunteers called one of our partners to say they were in urgent need of some of the food packets. I didn’t know how much time it would take for us to get the funds and everything lined up, so from his savings he gave some money to buy some food packets. When that volunteer went to a local pastor in a small suburban area and he gave him that food packet, he was sharing:

“My brother, if you had not come today, because we were hungry for the last three days, we were even thinking of taking our lives.” That is the terrible story we hear every day.

Getting there, supporting those people is so important, so needed at this point in time. And we can do it only because you’re praying, you’re supporting.

Amazing. What difference does praying and supporting make in the lives of persecuted believers? 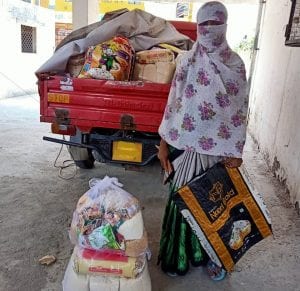 One thing is that these people are already being discriminated against for a long time. They are living in those dangerous places and facing persecution, even brutal beatings, every day of their lives. On top of that, they have lost all their belongings and livelihood at this point. And now, they are in desperate need of help. And when we get there, it’s because you’re praying, supporting, it means a lot to them—it’s everything for them. And when we see them in tears, praying for all of you, thanking God for your life, for the support that you’re giving, it’s really amazing. It’s so meaningful. It’s so deep.

I can’t explain how important it is to be there at this time, in this situation, with all those people. And it’s only God’s grace that God has given us this opportunity to reach them, to stand with them. We will live for them. We are part of them. We belong to them.

‘We are always in danger’—the risks our field workers take to be God’s hands and feet in India ‘Christians are suffering even more’: India during coronavirus ‘If you’re not Hindu, you’re not Indian’—The rising storm against Christians in India Beaten, neglected and abused: A crisis for Indian Christians during COVID-19

Christians around the world—in places like Vietnam, India, Bangladesh, Syria and more—are desperate for help in the midst of the coronavirus crisis. We’re hoping to send 50,000 food kits to help thousands of Christians. $30 can provide a single aid kit—will you help?

Is violent persecution still happening even in this current COVID-19 crisis? What is happening to persecuted believers in India?

In India, we have a very pro-Hindu fundamentalist government whose agenda is to make this country into a Hindu nation. At the local level, they threaten the churches, Christian groups, and believers to recant Christianity for Hinduism, and they also stop them from going to church to worship. Whenever they hear that there’s a group of people meeting as a church, they attack them, beat the pastor and church leader brutally, and they don’t even spare women or children!

There are many instances of that—when the pastors are brutally beaten to death—and we lost many lives. There are so many pastors and church leaders who have been brutally beaten and ended up in the intensive care unit for months. But by God’s grace, their lives have been saved because the Lord has touched their lives.

Do you see this time of persecution as a catalyst for growth in India’s church?

Yes. The church will be growing even faster than it was before the coronavirus outbreak, because the people have seen the Christians and how they’re blessing and helping other people during this difficult time. More and more people are turning to the church and want to know Christ more. We’ll look for a big harvest in the coming days. And the church can stand and minister to those people, to embrace them and to hold them and take care of them and make them grow in Christ.

The church is struggling at this moment where the people are dispersed. They are not allowed to come to meet or to gather together, or to pray or to study the Word, but they won’t die out. The church will grow stronger because the hunger for the Word of God—the hunger for knowing the Lord—is growing. Just like in decades and centuries past, persecution will grow the Church. More people will come to know the Lord in the coming days.

What encouragement would you give our supporters from God’s Word?

During this difficult time, I was reading Colossians 2:6-7: “So then, just as you received Christ Jesus as Lord, continue to live your lives in Him, rooted and built up in Him, strengthened in the faith as you were taught, and overflowing with thankfulness.”

We know that the situation is terrible, very difficult. This scripture is something very encouraging for us—to see who God is, what He has done and what He wants us to do: to remain in Him, be rooted in Him, to be built up in Him, and to be thankful in Him.

So I want to encourage each of you: You know your Lord, who He is and what He has done, so hold on to Him. Be deeply rooted in Him. Be built up. Give thanks to Him in every situation, in everything. God bless you.

‘Christians are suffering even more’: India during coronavirus

‘If you’re not Hindu, you’re not Indian’—The rising storm against Christians in India

Beaten, neglected and abused: A crisis for Indian Christians during COVID-19