Once again, the island town of Jolo is mourning after two deadly explosions ripped through the area in the Southern Philippines on August 24, killing at least 14 (some estimates put the death toll as high as 20) and injuring at least 75, including military and civilians. The area of the attacks is near Cathedral of Our Lady of Mount Carmel, where two explosions killed 23 people on January 29, 2019.

Some 18 months later, Jolo is reeling from more attacks. The first bomb exploded around 11 am, near the highly populated public area of Plaza Rizal Park. Most of the victims, including children, were killed and wounded in the first attack, when a bomb attached to a motorcycle exploded near two parked army trucks in front of a grocery store and computer shop in Jolo. 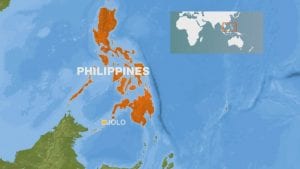 The second blast, apparently from a female suicide bomber, occurred about two hours later around 1:20 pm. A military report said the suspected bomber walked out of a snack shop, approached soldiers who were securing a Roman Catholic cathedral and “suddenly blew herself up.”A third unexploded bomb was reportedly found in a public market. Right now, more bombs are assumed to be planted around the area; authorities are searching the sites.

Reportedly, Muslim extremists are behind the attacks though so far no group has claimed responsibility. Philippine military officials say Muslim militants allied with ISIS set off the bombs. Jolo, capital of the Sulu province, is one of a chain of mainly Muslim islands in the southwest of the majority-Roman Catholic country. It is a known stronghold of the Abu Sayyaf extremist group, which has affiliations to ISIS and is blacklisted by the United States and the Philippines as a terrorist group for past bombings, ransom kidnappings and beheadings.

The bombings come as the Filipino government grapples with what is now the highest number of coronavirus infections in Southeast Asia.

In the 2019 attack, ISIS claimed responsibility for the two bombs that targeted a worship service at Cathedral of Our Lady of Mount Carmel. One bomb exploded inside the church. The other struck in a nearby parking lot as congregants panicked and rushed outside.

The attack came days after voters rejected Jolo’s inclusion in a Muslim autonomous area; the referendum was overwhelmingly approved in other parts of the Mindanao island group.

The 2019 statement from ISIS said the attack was carried out by “two knights of martyrdom” against a “crusader temple.”

Pray for Jolo with local Christians

Open Doors has on-the-ground partners in the area of the recent bombings. One of our contacts, Omar, left the area of the first explosion only 10 to 15 minutes before the bomb went off. He asks us to pray: