Eritrea is rounding up and arresting Christians—37 in two days

In the last month, Open Doors local partners have received growing reports of more arrests of Christians in Eritrea. The wave of arrests could indicate a renewed campaign against anyone caught worshiping outside the only four recognized religious groups in Eritrea—Sunni Islam, Eritrean Orthodox, Catholic and Evangelical Lutheran.

Known as the “North Korea of Africa,” Eritrea is infamous for its intricate and inhumane prison system, often putting prisoners in shipping containers, creating insurmountable conditions and leaving them in isolation. Prisons are part of an underground tunnel system that often prevents families from reaching and even contacting their loved ones. Conditions have even worsened due to the pandemic.

Human Rights Watch reports that “COVID-19 restrictions denied many detainees vital food parcels and sanitary products their families would have provided.” For months, Eritrea’s government reportedly has ignored calls by international rights organizations to release prisoners who were unlawfully detained.

In 2018, Pastor Ogbamichael Teklheimanot shared his story with Open Doors, giving us a window into the conditions Christians are often subjected to in Eritrean prisons. Imprisoned for 11 years, he told about the horrifying living conditions and torture he endured in Eritrea’s Mitire Camp, known as a military concentration camp. In the two years since his release, and with the COVID-19 pandemic, conditions have worsened for our imprisoned brothers and sisters in Eritrea.

Because he refused to renounce his faith in Christ, Pastor Ogbamichael was subjected to particular abuses reserved for outlawed religious groups. His life is an example of the deep and continual persecution that Christians in Eritrea, especially those who lead the church, face every day. You can read his story below:

In October 2007, Pastor Ogbamichael Teklheimanot took a phone call from one of his church members who was fleeing the country. The pastor had no idea it would be his last day as a free man for the next 11 years.

Unbeknownst to him, Eritrean security forces were monitoring this church member. The phone call led to his arrest and imprisonment, though no charges were ever brought against Ogbamichael who served as the senior pastor of Kale Hiwot, or “Word of Life” church in the country’s capital city of Asmara.

Ex-prisoner Pastor Ogbamichael Haiminot was one of thousands in jail cells and prison camps—arrested for being part of an unrecognized religious group.

Over the last 15 years, Pastor Teklheimanot has been in and out of jail cells, each time arrested for following Jesus.

In 2003, Ogbamichael was arrested and held for several weeks for continuing to lead church meetings. (In 2002, the Eritrean government introduced a law prohibiting Christian practice outside the Orthodox, Catholic and Evangelical Lutheran denominations, as well as Sunni Islam.)

Two years later, he was arrested again in January 2005 following his participation at a Protestant wedding ceremony. That arrest led to imprisonment in Asmara Police Station No. 5 followed by 10 months of solitary confinement and hard labor at Sawa military camp.

Before his arrest and detention in 2007, Pastor Teklheimanot had only been out of jail for six months. At some point during the next 11 years, he would find himself in Eritrea’s infamous Mitire Camp in the northwestern area of the country. Used specifically for members of outlawed religious groups, Mitire has been called a “military concentration camp” notorious for Christian torture and its abuses against prisoners. Christian leaders in these camps have reported being tortured and coerced to recant their faith or sign statements vowing they will not practice their faith, gather to worship, or express their beliefs in any way.

Below is a map of Eritrea’s extensive prison network known for its abuses against Christians and other religious groups. 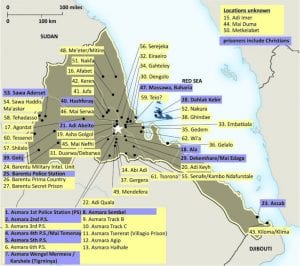 There are thousands like Pastor Teklheimanot who are still suffering under the country’s cruel and inhumane regime. Consistently in the top 10 on Open Doors’ list of the 50 most dangerous countries for Christians, the Muslim-majority nation has appeared in world headlines for its egregious human rights record. Pray with us for these recent prisoners and the lives of so many inside cages.

Pray for the Lord’s abundant grace be upon the detained believers as they likely face harsh prison conditions.

Pray for these believers to have wisdom as they interact with officials and possibly undergo interrogation.

Pray also for His peace that surpasses all understanding to guard their hearts and minds in Him (Phil. 4:6).

Ask God to thwart the plans of the Enemy for the believers in Eritrea.

Religious freedom advocacy: More than pointing out the issues

We Must Keep Standing Up!