How COVID-19 is making Christian persecution even worse in Africa

When 22-year-old Yohannes* from Ethiopia’s Tigray region accepted Jesus, he knew he was likely losing his Muslim family, who would see his decision as a betrayal to their family and tribe.

But not only was he shunned by his family, Yohannes’ community expelled him. In his part of Ethiopia, Christians are denied access to community resources and are ostracized from society, effectively cutting him off from help or support.

He doesn’t share details, but after Yohannes was shunned, he found refuge with other believers. Now under government-imposed coronavirus restrictions, life has changed once again for Yohannes. His struggle to live has become that much more difficult. Because his own family has turned their backs on him and the Christians he knows are now living hand-to-mouth due to not being able to work, Yohannes is struggling to find enough food to eat.

He is one of hundreds of thousands of believers throughout sub-Saharan Africa who are not only persecuted for their decision to follow Jesus but are now doubly vulnerable to the impact of a global pandemic.

While the coronavirus pandemic has hit Asia, Europe and North America with full force, sub-Saharan Africa—home to 1.1 billion people—is only at the beginning of the crisis. By Tuesday, April 14, there were 9,100 reported cases, with a death toll of 195—a death rate of just over two percent of reported cases. There are likely many more cases, but reporting has lagged behind in many places that don’t have adequate healthcare networks or access to testing.

According to Open Doors World Watch Research, data indicates a direct correlation between the countries in sub-Saharan Africa that are most vulnerable to the virus and the countries where Christians face the most pressure for following Jesus. Specifically, four of the five most virus-vulnerable countries—the Democratic Republic of the Congo, Nigeria, Sudan and Cameroon—also count among the places in sub-Saharan Africa where life is hardest for Christians. 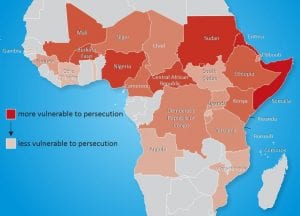 Countries most vulnerable to Christian persecution 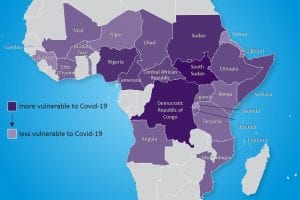 Countries most vulnerable to coronavirus.

Though the 54 countries in sub-Saharan Africa are in their early days of the coronavirus pandemic, persecuted Christians like Yohannes are already feeling the effects. For Christians who are already persecuted, the pandemic gives way to even more ways believers can be discriminated against, exploited and attacked for their faith.

Recently, Open Doors met with Rev. John Joseph Hayab in northern Nigeria, who shared how the pandemic is doubling vulnerability for believers: “We are facing persecution because of our faith and we are also facing a global pandemic,” he says. “We run away from our persecution … or we run away from the global sickness that we are facing. We have a double problem.

“But in all this, we still come back to remember the Word of Jesus: ‘Be ye of good cheers, for I have overcome the world.’ But He didn’t start with that; He says: ‘In this world you will have many troubles.’ This is another additional trouble we are facing.”

The economic impact of government-directed social distancing and lockdowns is especially difficult for pastors dependent on tithes for their income and serving in the most volatile areas. As these rules and guidelines prevent church members from working and attending church, more pastors will face great difficulty to feed their own families.

Open Doors has received calls from some pastors asking for help with food. And widows and orphans with small incomes due to lockdown are unable to continue trading. Suleiman M*, director for Open Doors’ work in West Africa, comments that requests for food and other vital support are continuous, especially from overcrowded camps for internally displaced persons (IDP).

Specific targeting by Islamic radical groups like Boko Haram, ISIS, Fulani militants and the Allied Democratic Forces (ADF) across the region has displaced many thousands of Christians. In the Lakes, Sahel and Horn regions, the social and health infrastructure in IDP camps are unable to handle the far-reaching and rapidly spreading impact of a COVID-19 outbreak. Unless humanitarian aid workers get the funds and access to continue their work, believers in these camps will suffer intensely without water, sanitation and hygiene.

In an IDP camp in Maiduguri, overcrowding is extensive. Social and health infrastructure in IDP camps are unable to handle the effect of a Covid-19 outbreak.

“The COVID-19 situation poses a threat and a challenge to us, for many of our widows and other vulnerable believers,” Suleiman says. “Some in the IDP camps are really relying on support from us to be able to continue to live. It’s a challenge at this time, but we trust the Lord as we stand together, that He will help find solutions to these issues. We thank you for your continued prayers and support for the persecuted church here in West Africa.”

Our field also reports that in some Shariah-governed areas, the government is discriminating against Christians. Believers from towns in northern Nigeria’s Kaduna State, including Ungwan Boro, Sabon Tasha, Barnawa and Naraye, report they get six times smaller rations from the state than Muslim families.

Believers we talked to shared that a Christian family of four receives a grossly inadequate ration of a single packet of noodles and one small plate of uncooked rice.

For Christians in Africa and around the world who are already persecuted for their faith, the global pandemic is making life even more difficult. They have less access to healthcare, medicines and community services. Open Doors is committed to standing with the least of these—to ensure that the vulnerable have what they need too. God’s people need our help urgently—will you give today?

Even in a pandemic, violent persecution continues. In some areas, such as Nigeria’s Middle Belt, Christians are living in a survival culture.

One pastor in the area shared: “We lie down at night, not knowing if we’ll wake.”

Between the end of March and Easter, Christian communities in both Kaduna and Plateau States suffered numerous attacks by extremists that killed 31 people and left homes destroyed.

“In the midst of this coronavirus challenges and situation, the attacks on Christians have not stopped,” Suleiman says. “Therefore, we want to ask you to stand with us in prayer and support that we can continue to serve the persecuted Body of Christ, even in these very difficult times we are all passing through.”

In some areas, extremists are exploiting the opportunity to blame Christians for causing the pandemic. Our team has received such reports from Somalia, Uganda and Niger. The BBC reports that extremist group al-Shabab (linked with al-Qaeda) has warned Muslims to beware of infectious diseases such as coronavirus, which the group says are spread “by the crusader forces (Christians) who have invaded the country and the disbelieving countries that support them.”

Bulama Bukarti, a sub-Saharan Africa analyst at the Tony Blair Institute for Global Change, explains that if the pandemic grows in Muslim-majority areas, extremists will spread conspiracy theories about its origins, blaming the West, Jews and Zionists—whom these extremist groups call the “enemies of Islam.” If the spread of the pandemic is controlled and does not reach Muslim-majority areas, particularly those controlled by extremist groups, they will frame it as divine punishment against those areas.

A breeding ground for recruitment

Experts warn that extremist groups will also exploit the pandemic to recruit members. “We are already seeing indications that this has started happening,” writes Bukarti.

“Either way, groups claiming to fight for Islam in Africa will use the virus outbreak to recruit and radicalize fighters and justify their narratives of hate, division and enmity,” Bukarti says, adding that they have already seen examples of this from ISIS and al-Qaeda affiliates in other parts of the world in their coronavirus messaging.

Open Doors has witnessed how extremist groups in Africa work to deliver services such as health and infrastructure to recruit members and build credibility even in normal times. There is serious concern that these groups will exploit the pandemic and lack of resources and work to provide people with resources the state is failing to provide—creating a dependency on, and even affinity for, extremist groups.

Yasin A*, Open Doors’ East Africa director, underscores the importance and impact of bringing food and critical support to believers:  “If the persecuted church is not strengthened and supported at this time, then the enemy will not sleep to dismantle and take advantage against believers.

“If persecuted believers are not supported now in their spiritual, economical and emergency needs, it would be a discouragement for them in many ways. For many new, weak and troubled believers, it would be difficult to stand strong.”

For new believers, like Yohannes, who have left the religion of their larger family to become Christians and are struggling to eat, critical support means the difference between reverting back to Islam and even basic survival. When we strengthen believers in crisis, we equip and empower them to share their story of faith with others. Essentially, we help build the Kingdom.

“Your help is important to provide the basic economic and livelihood needs, and emergency needs of persecuted believers,” Yasin explains. “For some of the underground believers and Christian converts from Islam, it will also be helpful to minister, encourage and pastor them online and through any other available digital media or in person.”

Pastor Sule Sunday, a church leader in Benue State, said many believers faced starvation and began doubting because of their suffering. He points to the impact of support on young believers like Yohannes: “Open Doors has responded to our plights,” he said. “People are happy because we have never received this kind of support. This has not only solved our physical needs but also our spiritual needs!”

Praying with the persecuted church in sub-Saharan Africa

Yasin asks for continued and fervent prayer. “We know that you are praying already for the persecuted believers in Africa. I would like to encourage you to keep up your fervent prayer. The Word of God in James 5:6 says: ‘Therefore, pray for each other, so that you may be healed.’ The prayer of a righteous person is powerful and effective. Therefore, I would really like to encourage you with this word, to do that more and more.”

4 widows share their stories of loss & hope in Nigeria

When coronavirus comes to persecuted Christians—and how you can pray

‘It is very painful’: How coronavirus is impacting persecuted Christians in Asia