As persecution against Christians continues to intensify in India, church leaders, especially those in rural areas, often bear the brunt of it, finding themselves as first targets of Hindu extremists who resort to all sorts of persecution—even violence and murder—to stop the spread of the gospel. When you’re the one leading the church and sharing the gospel with others, the threat of violence raises exponentially. But as persecution increases, the passion of these rural pastors to spread the name of Jesus only grows more intense.

Please pray with these church leaders and their congregations today. We have numerous reports of church leaders in rural areas of India being brutally attacked:

Pastor Maddira Kotireddy, 54 was sleeping alone outside his home in the southeastern village of Renta Chintala when he was brutally attacked with an ax. As he struggled to save himself, he sustained severe injuries to his stomach, shoulder, face and hands, including the loss of his fingers. Family members carried him to the hospital where he remains in critical condition. Maddira is a Christian evangelist, known for visiting people in the nearby villages on his bicycle and sharing the gospel. Hindu extremists have been threatened his life several times if he continued his ministry. Please pray with him and his wife and four children. 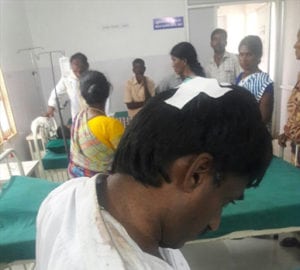 Pastor Rajesh was beaten severely and sustained a head injury when Hindu extremists interrupted the church’s Easter Sunday worship, hurling words of hate and physically attacking him and other worshipers.

Pastor Jose Prakash was conducting a baptism service at around 3.30 p.m. in ECI Church in the town of Hariharpur in the state of Uttar Pradesh when a group of Hindu extremists appeared and began to physically assault the Christians gathered there. Pastor Jose and two others were badly injured and rushed to the nearby hospital.

Pastor Sundar Singh was leading a fasting prayer service at Dharmapuri AG Church in the town of Dharmapuri in south India when two women who lived in the houses near the church threw stones at him. Sundar was injured and admitted to the hospital. The motorbike he uses for mission work was also damaged.

In the southeastern town of Kesalingayapally, the president of the village made huge boards with messages saying that foreign religion preaching is prohibited in the village. They also distributed Bhagavad Gita (Hindu religious books) to every house and started conducting Hindu meetings where they teach from Gita every evening. Please pray with the Christians and their leaders living there who are under constant threat and vigilance.

Join us in praying with these leaders and their families and churches for healing, future safety and courage to continue. We will bring you updates on their conditions as we have them.

Photo is representative only