The death toll in Nigeria’s Benue State continues to rise. Over the last week, Christians have been massacred in what has turned into a spree of violence by Muslim FulaniThe Fulani are a large ethnic group in West Africa. A third of all Fulani people are pastoralists, making them the largest nomadic community in the world. More militant herdsmen.

Only a day after Fulani militants stormed a church service in the Christian village of Mbalom, killing 19 worshippers and razing more than 60 houses, the group mounted yet another onfall of violence in four predominantly Christian communities. The attacks have left at least 39 Christians dead.

The violence has Christian churches and organizations crying out in outrage over the continued slaughter of Christians. Since 2001, an estimated 60,000-plus Christians have been killed in FulaniThe Fulani are a large ethnic group in West Africa. A third of all Fulani people are pastoralists, making them the largest nomadic community in the world. More violence in northern Nigeria (#14 on the World Watch List). In this year alone, deaths of Christians number at least 560.

Last week’s four-village onslaught began at around 9 pm when armed militants invaded the villages of Tse-Umenge, Mbakpase and Tse-Ali in the Guma area, opening fire on residents and setting fire to more than 160 homes. The attacks reportedly continued into the early hours of the next day.

Below, area residents share their firsthand accounts of the massacre:

In Mbakpase, resident Alice Terwase told Morning Star News that the men who invaded her community were dressed in military camouflage and carried AK-47 weapons.

“The herdsmen destroyed more than 60 houses in our village, and three members of my community were also killed during the attack,” Terwase told the news service. “At Tse-Ali village, more than 70 houses were set ablaze and 21 Christians killed.

In Tse-Umenge, resident John Umenge said that in his village, more than 50 houses were burned down.

Area resident Terungwa said he called on security agencies to come to their aid: “Security agencies should take note of the ugly incident as most of the defenseless villagers are running in the bushes for their lives,” he said.

Richard Nyajo, council chairman of Logo Local Government Area, reported an attack in the village of Mbamondo that took place in a church in the early morning hours on Wednesday. He said herdsmen entered the African Church of Mbamondo around 12:20 a.m. “Seven Christian villagers who were displaced in previous attacks and were taking refuge in the church premises were killed,” he reported.

‘The Bomb Must Be Diffused’

Nigeria President Muhammadu Buhari faces growing unrest as Christians voice their grief and outrage over continued FulaniThe Fulani are a large ethnic group in West Africa. A third of all Fulani people are pastoralists, making them the largest nomadic community in the world. More attacks, despite Buhari’s previous pledge to eradicate terrorism in Africa’s most populous country.

Responding to the continued FulaniThe Fulani are a large ethnic group in West Africa. A third of all Fulani people are pastoralists, making them the largest nomadic community in the world. More militant herdsmen violence, a number of Christian organizations, including the Christian Association of Nigeria (CAN) and the Catholic Bishops’ Conference (CBCN), have called for Buhari to step down over what CAN called his “inability to tackle the ceaseless herdsmen killings and security challenges confronting the country.”

In the CBCN’s statement, the Bishops noted that they have consistently asked Buhari to revisit the makeup of the country’s Muslim-dominant security agencies.

“How can the Federal Government stand back while its security agencies deliberately turn a blind eye to the cries and wails of helpless and armless citizens who remain sitting ducks in their homes, farms, highway and now, even in their sacred places of worship?

“Now, our churches have been desecrated and our people murdered on their altars. Today, we Christians feel violated and betrayed in a nation that we have all continued to sacrifice and pray for. We collectively feel abandoned and betrayed,” the Bishops said.

“It is clear to the nation that [President Buhari] has failed in his primary duty of protecting the lives of the Nigerian citizens. Whether this failure is due to inability to perform or lack of political will, it is time for him to choose the part of honor and consider stepping aside to save the nation from total collapse.”

The Bishops stressed the urgency for action.

“We are sad and fear that the clock is ticking. The bomb must be defused quickly before it explodes.”

On Monday, April 30, President Buhari met with President Trump at the White House where Trump addressed the violence and specifically, persecution of Christians in Nigeria.

“We are deeply concerned by religious violence in Nigeria including the burning of churches and the killing and persecution of Christians. It’s a horrible story,” Trump said in a joint press conference.

“We encourage Nigeria and the federal state and local leaders to do everything in their power to immediately secure the affected communities and to protect innocent civilians of all faiths including Muslims and including Christians.”

In his editorial in USA Today, Open Doors CEO David Curry called on Trump to leverage Monday’s meeting with Buhari “to insist upon meaningful protection for Christians who continue to be violently attacked.”

“President Trump must not pass up a prime opportunity to fight this injustice by facing down its chief enabler,” Curry wrote. “Buhari intends to speak with Trump about the promotion of economic growth, fighting terrorism, and building on Nigeria’s role as a democratic leader in the region.

“But the conversation must not stop there.

As Buhari traveled to Washington, D.C., churches throughout Nigeria held public protests on Sunday, April 29, with thousands calling the government to put an end to the bloodshed and violence.

In a statement Samson Olasupo Ayokunle, president of the Christian Association of Nigeria, said: “Government should be called upon to perform its constitutional responsibility of protecting citizens now. No excuse should be given for this wicked act again and perpetrators must be brought to book now.”

The protests also called for the release of the remaining Chibok girls and Leah Sharibu, the only girl still in Boko Haram captivity after fighters kidnapped more than 100 girls from a secondary school in Dapchi.

“Leah Saribu must not die and she must regain her freedom now. No longer tomorrow. This government will have blood on its hands if Leah Sharibu is not released with immediate effect as well as all the Chibok girls who are still in captivity. What was the magic wand they used to release the Dapchi girls who were predominantly Muslims that they couldn’t use for the Chibok girls and Leah Sharibu? That has put a question mark on the sincerity of the government and we, the Nigerian Christians are demanding the freedom of those girls without delay.”

“All people in captivity must be released without delay. We are already at a breaking point and a state of anomie is almost here.” 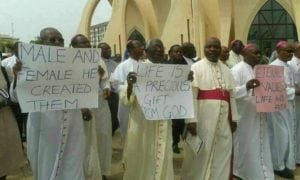 Ayokunle reportedly carried placards with other protesters with inscriptions directed to the federal government (FGN), such as:

Open Doors is continuing to advocate for Christians under attack in northern Nigeria. To help support believers as they return home to their decimated villages, Open Doors and our on-the-ground partners in Nigeria are coming alongside thousands of Christians like Sarah, Sale, Daniel, Saratu and Hanatu targeted by FulaniThe Fulani are a large ethnic group in West Africa. A third of all Fulani people are pastoralists, making them the largest nomadic community in the world. More and Boko Haraman extremist group that is located primarily in Northern Nigeria More militants. Open Doors is providing services like medical clinics, boreholes (for clean water) and schools, as well as crisis relief, including food distribution, for those forced to flee their communities. We’re also training churches to help them equip Christians to respond to persecution and stand strong in their faith through discipleship training.