Two years into his 10-year prison sentence for “establishing house churches,” Nasser Navard Gol-Tapeh, an Iranian convert to Christianity, released a letter to Christians. In it, he calls for prayer and reminds us that our prayers are a “sweet smelling offering to God.”

Nasser has been in Evin Prison, know as Iran’s “torture factory,” since January 2018. Below, we share his story and parts of this modern-day Paul’s powerful letter dated January 31, 2020. 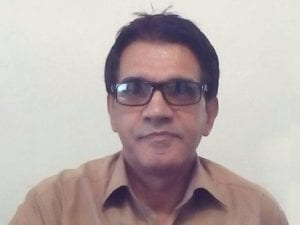 Nasser Navard Gol-Tepeh was imprisoned two years ago for leading a house church in Iran.

“I am confident in all hardships and I believe I will become free by Him who I have hope to (my Lord) because the Lord our God does not forget his children … so let me be bold and say, ‘The Lord is my helper,’” wrote Nasser, who will turn 59 in August.

Nasser was first arrested in June 2016 alongside three Azerbaijanis, when police invaded a house where they were worshiping. For four months, the men lived in solitary confinement in Evin Prison where they endured intense interrogation. They were released when they posted bail of $35,000 for each man.

Following a court hearing on May 23, 2017, Judge Mashallah Ahmadzadeh sentenced Nasser to 10 years in prison for “action against national security and establishing house churches.” He lost his appeal against his sentence in November 2017 and was moved to Evin Prison in January 2018.

‘The Lord is my helper’

Nasser began his recent letter with the words of the apostle Paul to the church in Phillipi: “Now I want you to know, brothers and sisters, that what has happened to me has actually served to advance the gospel” (Philippians 1:12).

“I am confident in all hardships and I believe I will become free by Him who I have hope to (my Lord) because the Lord our God does not forget his children … so let me be bold and say, ‘The Lord is my helper.’”

He asks Christians to “remember me in your prayers always.”

Once again quoting from Philippians, Nasser writes, “You know that your prayers are a sweet smelling offering to God and a sacrifice which is accepted and pleasing to him.”

Nasser also requested prayer for his family to come to follow Jesus, for the Iranian people and the spread of the gospel. With his words, he challenged Christians to remain firm in their faith and to show concern for one another, not to give up meeting together and to work hard to spread the gospel. Finally, he asks for prayer for the other Christians in prison.

Watch a YouTube video he shared on his 58th birthday, one year in Evin Prison

‘My imprisonment will serve to further the gospel’

This is not the first time Nasser has put pen to paper to share powerful words.

In September 2018, he wrote an open letter to Iranian authorities, asking how his Christian activities could be perceived as anti-state.

“Would it even be possible for a committed Christian–who was born and raised in Iran and whose forefathers lived in this land for thousands of years, and who is a servant to the God who has called him to a ministry of reconciliation–to act against the national security of his own country?

“Is the fellowship of a few Christian brothers and sisters in someone’s home, singing worship songs, reading the Bible and worshipping God acting against national security?”

In that same letter, he again quoted from Paul: “I am in prison because of my faith in Jesus Christ. [My imprisonment] will serve to further advance the gospel.

In April 2018, Article 18 reported that he may lose all of his teeth if immediate medical treatment was not provided. Reportedly, his multiple requests for treatment were denied each time.

As requested by Nasser, please remember him in prayer and ask that:
• God will encourage and strengthen Nasser and all other Christian prisoners and that they will know His continued help
• Nasser’s family will respond to Jesus’ saving work on the cross
• God will bless the people of Iran and that the gospel will continue to advance, despite the many obstacles.
• The Iranian authorities will halt their persecution of Christian converts and other religious minorities”

Iranian Christian to Authorities: ‘My Imprisonment Will Further the Gospel’