‘It is very painful’: How coronavirus is impacting persecuted Christians in Asia

In many countries in Asia, Open Doors has to work under the radar, often through local church partners. The impact of the coronavirus crisis is immense. Many Christians are seen as the lowest in their societies and are neglected when aid is provided, particularly in some Islamic countries where Christians are seen as infidels. Open Doors workers and local partners on the ground are doing what they can to reach Christian communities that are cut off.

In a secret garage somewhere in Asia, there are 100 packages ready to be distributed. “These are going to pastors and partners who are being sidelined and ignored,” an Open Doors local partner, Hana*, says. “Each parcel is a point of hope and mercy for their communities. They contain enough food and soap to get families through at least two months. We have planned a few dozen more of these distributions.”

Hana’s work has to be done in secret. She and everyone else involved in these distributions are at great risk of being imprisoned by the authorities, who don’t want the world to know what is really happening in their country. “Our government does try to help people in need,” Hana says. “But some of our most remote communities have been neglected when they were identified as Christians. We distribute this aid to the Christian pastors and leaders so that they have the energy to cope with what is at hand.” 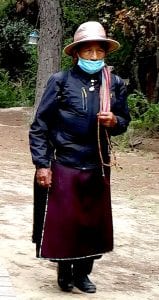 There is an added risk in these special circumstances. By going on the road, the workers are at risk of catching the virus themselves. “They wear gloves and self-made masks,” Hana says. “In the vocational training centers that Open Doors supports, the women knitted a lot of facial masks. After we had to send them home because of the virus outbreak, they continued to produce masks for the teams. Unfortunately, we don’t have any protective suits, but we do sanitize the bags and the cars. We trust God. He has done so much for us.”

According to Hana, it’s also important to explain to remote Christian communities how they can combat coronavirus. “We not only give them food but also a quick presentation from a distance on safety and hygiene protocols to encourage them to stay safe and act smartly at this uncertain and confusing time,” she says. “However, it is very painful to see how our people have been neglected and ignored because of their Christian faith.”

For many Christians already persecuted for their faith, the global pandemic is making life even more difficult. They have less access to healthcare, medicines and community services. Open Doors is committed to standing with the least of these—to ensure that the vulnerable have what they need too. God’s people need our help urgently—will you give today?

Hana also received a phone call from a Christian nurse who asked her, “Hana, please raise prayer for us. We are so tired, and this morning we discovered that Christian nurses are being assigned corona cases, because it is dangerous and the Muslim nurses don’t want the risk. We are dispensable. Please pray for us. We heard your pastor say at a prayer meeting last week, ‘Don’t quarantine Christ’s compassion.’ Even though we are frightened, we sense His love in us for the patients. Pray for us to be His hands and feet.”

Discrimination against Christians continues and is perhaps heavier to bear than at other times, as Hana personally experienced. “I was going to get some medicines for one of our medical workers,” she says. “A woman walked right up to me and suddenly took a step back. I thought she did it because of social distancing but then I could hear her utter from under her face mask, ‘Oh these filthy people, when will they ever leave.’ Suddenly, I remembered I was wearing a necklace with a cross.”

There are even more extreme cases. One couple, who was expecting a baby, lived in a building that was confiscated by the local authorities to use as a quarantine zone. “We took the bus to travel to my parents,” the husband said. “We wanted to stay with them. On the way, we were given the worst seats because the bus driver said, ‘I do not know what’s worse: have coronavirus or be a Christian.’ The seat was in such a bad condition that it hurt. My wife was in agony the whole time. When we arrived, we went straight to the hospital, but there was nothing that could be done. We lost the baby.”

Messages of despair and hope alternate throughout the day.

“I’ve heard people cry before, but this is something else, much deeper,” Hana says. “At the same time, I’m very proud of our teams who provide hope to persecuted Christians. I’m amazed by how much they accomplish. We distribute relief and have social media campaigns to encourage Christians. Yet, we worry about everyone. People can’t go to church. Their Christian family has been taken away from them. Yes, we can do some things online, but at the same time, we are monitored and need to be very careful in what we say.”

Even in these difficult circumstances, Hana and her team are thinking about the worldwide body of Christ. “Our team is praying around the clock for you.”

India dealing with a swift lockdown

In India, believers are dealing with a sudden lockdown issued with only a few hours’ notice. As of April 2,  India had reported “only” around 2,000 cases—but in a country of 1.3 billion people, there are sure to be many more. And such a high population has been deeply impacted by a lockdown, particularly the poor in India.

Believers are not immune from these consequences. For instance, Dhiraj* is a dedicated pastor. He and his small family live in the slums of a big city in India. He sent us a message: “Our church is situated in the same slums we live [in]. The church members are very poor, but each week they give an offering. This is my only salary: 200 to 500 rupees a week (roughly $2.50-$6.50). But now we are in lockdown, and there are no more offerings. I can go nowhere and I cannot find other work. I’m turning to you for help.”

Dhiraj is just one Christian with these needs. There are thousands of followers of Jesus like him—perhaps millions. All of them live in a country that has become increasingly hostile to the gospel over the last several years. The coronavirus outbreak threatens their lives.

Open Doors’ partner Rahul* says, “The congregations are really poor. Most church members are daily wage laborers and no work for the day means no food for the day. The pastors’ families are suffering the most. We have a plan to reach out to those who are truly starving. Can Open Doors please help?”

The help we can provide is important now—but also vital for the future. Open Doors has seen how extreme financial need has led radical Hindus to prey on poor Christians. “Right now, there’s not much interaction between people,” says a local Open Doors partner, Heena*. “But from experience we know that Hindu extremists may try to bribe poor Christians to become Hindus. Then—so they promise—their financial problems will be over. The current crisis makes the Indian church more vulnerable to these tactics.”

Relief and desperation through Asia

Relief efforts are happening in other countries as well. In the southern Philippines, a Muslim-majority region, the government is doing its best to help the poor, including Christians, but some of the relief work is starting up slowly.

For example, a group of believers in Central Mindanao have yet to receive aid from the local government. One of our partners shared there are only a few volunteers packing the relief goods, which is why it will take a while before the goods reach the area.

“There are around 30 families in the community who are still in need of food supplies and necessities,” our partner in the region says. “We need at least five kilos [around 11 pounds] of rice and groceries costing 500 pesos [about $10] for each family.”

Open Doors promised to send practical assistance to the 30 families affected in that area. A local Christian leader (a believer from a Muslim background) has been assigned to deliver the relief to them.

Open Doors has supported a few dozen other Christian families with a Muslim background in other Islamic Asian countries as well. A Christian woman from Malaysia told us on the phone: “My husband and I have lost our income, and we were praying to the Lord for a solution for our little family. We have a one-year-old girl to take care of. Immediately after we said ‘amen,’ you called us to ask if we needed any basic necessities! Yes, we do! Thank you so much!” 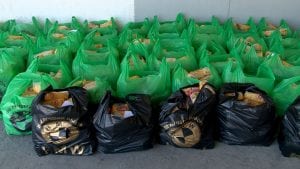 In many countries in Asia, the problems are only beginning. Some governments aren’t responding adequately. For example, the former Soviet republic Turkmenistan isn’t giving their citizens much information about coronavirus and denies there are any cases in their country.

In other places, such as the southeast Asian country Myanmar, it’s very hard to monitor people who have come from infected areas. This could lead to a massive virus outbreak in a worst-case scenario. “Christians stay at home,” says our partner from Myanmar. “But in our country, people are used to living in communities. This time of isolation is very hard for them, and they miss going to church. Sure, some activities are going online, but not everyone can afford internet. Many Christians read the Bible while being at home, but they are certainly in need of encouragement and prayers.”

And on the Korean peninsula, North Korea. is completely locked off from the outside world. “At the moment we cannot do much for the believers,” Open Doors’ North Korea coordinator says. “We encourage them via our weekly radio broadcasts.”

The news is not all bad in Asia. Good news comes from China, where it is believed coronavirus was first transmitted from animal to human. “Restrictions are slowly being lifted,” a Chinese Open Doors worker says. “Some of our workers have resumed the work in the area where they lived. They begin by visiting believers—believers from Muslim backgrounds—who have been very isolated in recent months. They often had to stay alone or with their Muslim families and were unable to meet any Christians during the lockdown.”

Chinese pastor from Wuhan: ‘The virus can’t stop us’

When coronavirus comes to persecuted Christians—and how you can pray