The 35-second recording was published by Nigeria’s online newspaper The Cable on Monday. In it, Leah makes a passionate plea to the Nigerian government for her freedom in her native Hausa language:

“I am Leah Sharibu, the girl that was abducted from Government Girls Science Technical College, Dapchi. I am calling on government and people of goodwill to get me out of this problem.

“I also plead with the members of the public to help my mother, my father, my younger brother and relatives. Kindly help me out of my predicament. I am begging you to treat me with compassion, I am calling on the government, particularly the president, to pity me and get me out of this serious situation. Thank you.” 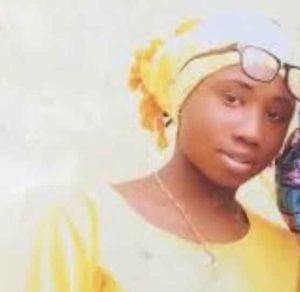 In the recording, Leah pauses several times, suggesting she was reading from a written text.

The Nigerian government is working to verify the authenticity of the recording, But Leah’s father, Nathan Sharibu, said the voice on the recording is his daughter’s.

“It really is her voice. I thought she might have been killed since we were told by those released that Boko Haraman extremist group that is located primarily in Northern Nigeria More kept her because she is a Christian. I can only imagine the way they would have treated her,” Nathan said.

He said the recording had given the family hope: “I’m really encouraged that I heard the words of my favorite daughter.”

The audio was accompanied by a picture of Leah, clad in a light brown hijab, sitting on a mat in an undisclosed location.

Leah was kidnapped on the evening of February 13, along with more than 100 other girls, when Boko Haraman extremist group that is located primarily in Northern Nigeria More militants stormed a girls’ secondary school in the Nigerian town of Dapchi. A month later, she was the only girl who wasn’t freed with the others because she refused to turn from her Christian faith and convert to Islam.

When all of the girls were loaded on trucks to go home, Leah was not allowed to go. Leah’s mother, Rebekah Sharibu, shared with an Open Doors team member what one of the released girls had told her:

“Leah was told to say some Islamic incantations before she would be allowed onto the truck. But she refused. She said, ‘I will never say it because I am not a Muslim.’ They became angry and told her if she wouldn’t denounce Christ, she would remain with them. Still, Leah refused. We watched Leah being left alone with the other members. We kept crying and waving at her ’til the truck vanished.”

Nathan Sharibu said the whole family was pleading for the government to do more, as were Christians and some Muslims that are “praying for my daughter,” he said. He is hopeful that the recording will redouble efforts to free her.

“For [Nigerian] President Buhari, nothing will be spared in bringing all our girls home. He will not rest until all of them are freed.”

Nathan said he hasn’t heard of any plan to release his daughter from Boko Haram captivity.

“Nothing is being done that I know of. I don’t know of any plan to release her. What I know is what I get from the media. I believe they can get her from Boko Haraman extremist group that is located primarily in Northern Nigeria More if they want to help us. We are very, very sad in the family. It has been seven months since she was taken.”

Reportedly, Boko Haraman extremist group that is located primarily in Northern Nigeria More has abducted at least 2,000 children since 2009, including 276  girls taken from a school in Chibok in April 2014. Of those, more than 100 are still missing, held by the militant group.

Praying With Leah Sharibu and Her Family

Father, we thank you for this good news that Leah is alive and this hopeful encouragement for her parents. We pray that You would continue to surround Leah with your comfort and protection, always strengthening her faith. And we ask that through Leah, her persecutors would see You and turn to Christ. Be close to her broken-hearted family, as they grieve and live their lives without their beautiful daughter. Ultimately, we pray for the release and safe return of Leah Sharibu. In Your Son’s name, we pray and ask for these things… #RememberLeah

Open Doors has followed the Sharibus’ story from day one of the Dapchi kidnappings and will continue to report on this developing story. Read our previous reports here:

Sign up below to receive news and prayer alerts on Leah Sharibu and Christian persecution throughout the world.