One year after Sri Lanka Easter attacks: ‘The bomb didn’t stop us’

“What happened on April 21, 2019, is we gave our loved ones for this country. Through that, we expect to receive souls from elsewhere. We have hope that God will give us Muslims, Hindus, Buddhists. Pray for our vision to reach 20,000 new souls in Sri Lanka. We want to reach villages for Christ.”

They are not the words you might expect from a man who only a year ago lost his 12-year-old son in a bomb attack on the church he helps lead.

But Pastor Kumaran, the assistant pastor of Zion Church in Batticaloa (one of three churches bombed last year on Easter Sunday in eastern Sri Lanka) has eternal perspective we don’t often see, especially in the darkest hours of life.

When our team meets him and his family again (Open Doors has walked with Zion Church since the attacks), he has just finished regular worship time with his family. He has the grey beard of a wise sage and the friendly eyes you hope to see in a pastor. He also looks very tired, but he smiles widely.

Today, our team has asked the pastor to look back on and reflect on that Sunday when the world changed for him and so many. A day that would claim more than 300 lives in eight coordinated attacks on churches and hotels in Batticaloa, Negombo and Colombo. Some 176 children lost one or both parents that day. In Zion Church, 31 were killed, including 14 children. Some 83 Zion Church families were directly affected, either by the deaths or serious injuries of family members.

One of the 14 children was Pastor Kumaran’s son, 12-year-old Malkyia. In the family’s living room, his framed photo rests on a small table flanked by two trophies.

Pastor Kumaran and his family gathered around the photo and trophies of Malikiya. “He loved Jesus and cared so much for others,” his father says.

That Sunday, Pastor Kumaran met his son’s killer. He even had a conversation with him and took a prayer request.

The stranger with the backpack entered the church compound and asked to see the pastor of the church. Rev. Roshan, the church’s senior pastor, was away on a trip so Kumaran walked over to greet the stranger and introduce himself.

“What’s your name? And where are you from?” he asked the man.

“Omar,” the man said, adding that he was from the south of Batticaloa.

Kumaran noticed the sweat beads on the stranger’s forehead, but it didn’t strike him as unusual. Strangers sometimes came to seek God’s healing in Zion’s Wednesday healing service.

Kumaran asked the man, “Do you have any prayer requests?”

“You could bring her to church for the healing service on Wednesday,” Kumaran suggested. He also invited the stranger to enter the church hall, but he refused. Then the pastor told the man with the backpack to just wait outside and watch what was going on. He had to leave Zion Church to conduct the service at another church connected to it.

Quickly, church members raced to call Pastor Kumaran. He remembers the first of many calls: “Pastor, come back! The church is burning!”

Kumaran entered the church, unprepared for what he would see. “Everything was … nasty,” he recalls, visibly recoiling at the memory of the scene. “I saw dead bodies. People were carrying the bodies. I saw my co-workers, believers. They were screaming, crying. Blood was all over the place.”

He quickly asked around for his sons, Malkiya and Jeremiah. Assured they were alive, the pastor went into action caring for his flock—ministering, praying and comforting those who were injured, ensuring they got to the hospital.

Stand with persecuted believers in Sri Lanka and beyond

‘God gave me the strength’

But by early afternoon, about 2 pm, Malkiya, was still missing. He was not in emergency room, the ICU, nor in any of the other wards. From the hospital, Kumaran went back to the church to frantically search for his son. He checked the surrounding areas and nearby houses and even went back to the hospital again at 5.30. Nobody had seen him.

And then a frightening thought: Could Malkiya have been killed in the blast? Could one of the two bodies he saw near the damaged church van when he arrived back at the church be his son?

Later that day, Kumaran received another call. It was the mortuary. His fear was confirmed. As he drove to the mortuary, Kumaran thought about his young son. Scenes flashed in his head. He remembers the many hours he and Malkiya had spent decorating one of the bedrooms in the house as a birthday gift to his mother last October.

He shares about his young son, the middle child in the family: “He was a good son, very talented in music. He played the octopane and violin. He would always make everyone in the family laugh.

”He loved the Lord and cares so much for others.” In the last couple of days before the attack, Kumaran remembers Malkiya repeatedly singing, ‘I have decided to follow Jesus.’

As Kumaran described her son, Saratha, face buried in her hands, heaved heavy sighs. She looked at the photo of her son blankly and said, “It is not bitterness. It’s just the memories.”

Back at the mortuary on Easter Sunday, Kumaran saw the body he was asked to identify. He knew that purple shirt. He knew it well. It was too painful. So painful that Kumaran had to be hospitalized that evening.

“When I think of what happened to my son, there is a pain in my gut,” Pastor Kumaran, Malkiya’s dad, says, in tears. “But it’s not a question of why it’s happened—no,  I’m not going to ask that. It’s a question of ‘Lord, how can I pass through this? And ‘How long?’”

Early the next morning, Kumaran took the remains of his son home and six hours later that morning, the family buried him. It wasn’t an easy decision to bury Malikiya so quickly. But he knew what lay ahead.

“I am a pastor. Everyone was looking for me that day,” he explains. “I had a responsibility to fulfill to the others. If I didn’t bury my son first, there would be a delay for the others.

“My wife loves my son very much. I love him very much too. My mind was filled with him, but I had to do it for the sake of other people. “I am a pastor,” he murmurs. “I have to be strong.”

“God. God gave me the strength.”

For Kumaran, persecution for his faith isn’t anything new. Since he came to faith 18 years ago, he knew that he could be killed. “I was born a Hindu. But when I received Jesus Christ, I was working in Saudi Arabia. I worshiped God in the underground church there,” he said.

“One day my friends and I were caught in an ‘illegal’ religious gathering. We were sent to prison. I thought that would be the end of my life.” It was 2002 and Saudi Arabia was in the headlines for beheading Christians.

By God’s grace, he and others were deported instead. All returned home safely.

The experience, he says, shaped his faith and ministry when he started to serve God in Sri Lanka. And when he got married and started a family, he always told his children about what iy meant to be a martyr.

“One day, we found out that Malkiya had been secretly reading a book about martyrs,” he shares. The moment he read what Malkiya wrote in one of his essays struck awe in him too: “Malkiya wrote this: ‘Like St Paul, we also want to dedicate our lives to die for Jesus Christas a martyr.’ And that was what my son did become. Now he rests in peace with Jesus.”

“Presence is what we need more than anything else” 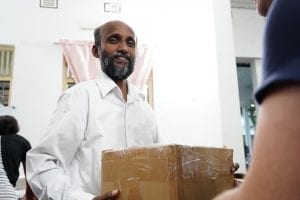 83 families of the deceased and injured in Zion Church.received care boxes filled with letters, Christmas cards and gifts. Open Doors has walked with the church over the past year through support, prayer and multiple visits.

After the attacks, an Open Doors team regularly visited Kumaran and the other families in Zion Church. Despite exhaustion, Pastor Kumaran is clearly thankful for that support.

“Open Doors really did their best for us,” he says. “I especially want to thank them. They spent the time with us. A lot of time with us. To pray and stay with us. Sharing with us, hearing from us, crying with us. I saw that. That really comforted us. That’s what we need more than anything else.”

With your help, Open Doors also organized the delivery of care boxes to Kumaran’s family and the 82 other families who lost loved ones in the bombing. Inside these packages were many small gifts, like tea, biscuits, trinkets, journals, frames, cards, and letters from believers all over the world.

These boxes, Kumaran said, showed them they were not alone, that the global Church knew their story.

“Saratha and I realized that there were many people who were praying for us,” he says. “The bomb didn’t stop us. And the attack has not dampened our church’s vision. Instead, it has strengthened our resolve.”

Your prayers and support have enabled Open Doors’ local partners to care for victims of the Easter 2019 bombings through pastoral care visits for prayer and encouragement, delivering care packages from around the world and providing practical support. Open Doors has worked with local churches to replace motorbikes that were destroyed in the fire and help believers restart their businesses or launch new ones. We will continue to provide spiritual and practical support to our Sri Lankan brothers and sisters as they heal and rebuild their lives.

The cross is still standing: Reflections from Sri Lanka

Worst Attack on Christians in Asia in Recent History