As the months since the last day she saw her husband continue to pass, Susanna Koh is again taking intentional steps to bring home Pastor Raymond Koh. The church leader was abducted in broad daylight on February 13, 2017, only miles from his home in Petaling Jaya, West Malaysia.

On Sunday June 24 (June 23 in the United States), Susanna and the families of three other abductees kidnapped under similar circumstances are gathering in a public prayer gathering–an opportunity to encourage supporters to join their brothers and sisters in Malaysia, as well as believers around the world as we pray with the Kohs.

The gathering comes a month after Susanna Koh and the wife of Amri Che Mat (abducted in November 2016 under similar circumstances) got the breakthrough they had been hoping for–and two weeks after she and Norhayati Mohd Ariffin, wife of Amri, recently wrote an open letter to the newly elected Prime Minister of Malaysia. In the letter, the wives describe the long-awaited breakthrough and the events following.

On the night of May 12, a police sergeant knocked on the door of Norhayati’s house. The officer was remorseful and confessed that both men had been taken extralegally in a police operation.

The sergeant told Norhayati and her daughter that Amri was taken by a police team directed by a special police branch known as Bukit Aman. He alleged that the inspector-general of police at that time had knowledge about the operation.

The police officer identified himself as a member of the Perlis police team investigating Amri before his disappearance. He claimed that while the Perlis police department (PDRM: The Royal Malaysia Police) was not directly involved in the operation that snatched Amri, his superiors knew who was involved.

The sergeant also told Norhayati that the team that took Amri was the same team that took Pastor Raymond Koh. When Norhayati asked why, he replied: “Because he ‘apostatized’ Muslims.” (In Malaysia, the Muslim culture guards against Muslims converting to Christianity.)

Sign up to receive prayer updates on Pastor Koh and Christian persecution around the world.

The letter goes on to say that since learning about this information, the families of Pastor Koh and Amri have taken proactive steps to expedite efforts to investigate this new lead, including filing a police report, providing both information and evidence. Norhayati and other witnesses have also testified under oath about this new lead at the ongoing public inquiry into their husbands’ disappearances.

Norhayati also wrote to Malaysia’s minister of home affairs, expressing her fear that the investigations may be tainted because of a possible conspiracy of senior officers who may have authorized, supported, known or concealed information about the husbands’ disappearances. She pointed out that the sergeant who had offered this lead would not be willing to testify truthfully without adequate protection or legal immunity.

At an inquiry on May 30, police produced a copy of a police report by the sergeant admitting that he met Norhayati on the night of May 12 but denied he said that the police were involved in the disappearances. Such a disclosure, he states in the report, would be detrimental to him personally. 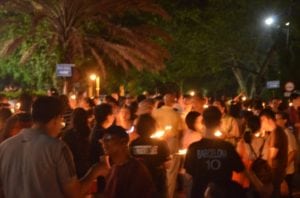 Malaysians gathered to pray for Pastor Koh’s return on the one-year anniversary of his abduction.

In the open letter, Susanna and Norhayati write that they believe there is “compelling evidence that our husbands were deprived of their liberty by parties acting with the knowledge, support and/or concealment of the act.” This, they said, placed their husbands outside the protection of the law.

They noted that the government is in a transition period since the general election yet called for immediate action, especially after this recent lead.

“Your government is the one in power today. Any delay in this matter could be seen by those inside and outside Malaysia as a breach in the rule of law and the denial of our husbands’ right to be protected under that same law.

“Respectfully, we plead to your government to immediately and independently investigate these serious allegations with urgency, transparency and impartiality,” the women wrote, “especially because those allegedly implicated include high-ranking and powerful police officers.”

Susanna and Norhayati also asked for immunity and a safe place provided for whistleblowers, including the police sergeant, to come forward with knowledge about our husbands’ abductions: who took them, where they are now and who was involved in the “high-level conspiracy of silence.”

They also said they believe their husbands’ disappearances are linked to religious issues, referencing a November 6, 2016, speech made by Division Chief Assistant Director Awaludin, claiming that the “Shia enemy” and Christian preachers are more dangerous than ISIS. He complained that after the repeal of Malaysia’s Internal Security Act (ISA), current laws did not allow the police to detain such “enemies.”

The women reiterated that since the sergeant’s May 12 disclosure, they have seen no effort by the government to ensure an independent investigation. Instead, the very people the sergeant claimed were responsible for the abductions are in charge of the investigations.

The two wives reminded the prime minister of their personal loss: “We plead for the truth. It has been 565 days since Amri was taken in Kangar, Perlis, and 484 days since Raymond was snatched off the street in Petaling Jaya, Selangor. Please help us find out what happened to our husbands, who took them, and where they are now. We want them back with us. We beg for justice.”

Praying With the Kohs

Please continue to pray with the Koh family. Susanna has asked for the following prayers:

• Pray for fine weather on the day of prayer and that the turnout will be good.
• Pray that our message will be heard in the heavenlies and by those in earthly authority.
• Pray that the new government will act on the cases of disappearance with urgency.
• Pray for truth and justice to prevail.

If you haven’t already, please sign our petition to speak out for Pastor Raymond Koh and other abductees.  #findpastorraymond