I was born in Presbyterian 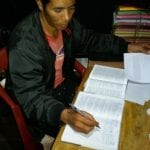 I was born in Presbyterian Church of India and I was baptized since infancy. Being a believer I found the Holy bible was the greatest book in this world we were living. No any other book could be compared with It. The word of God can crush the heart stone of a person, transform the whole life of a person. Through the words of God I understand I am a sinner, I need the remission of sin. The anyone who did against the words of God would be cast out in the eternal lake of fire. The verses of John 3: 16-18 For God so loved the world that He gave His only begotten Son, that whoever believes in Him should not perish but have everlasting life. For God did send His Son into the world to condemn the world, but that the world through Him might be saved. He who believes in Him is not condemned, but he who does not believe is condemned already, because he has not believed in the name of the only begotten Son of God.