The violent darkness of persecution surfaced in an Indonesian community in the Central Sulawesi province on Friday morning, November 27, when Islamic extremists viciously attacked a remote Christian village, leaving a trail of destruction and grief.

The details are difficult to report and read. In one day, four men—all leaders of families and the small community—were dead. Our Open Doors partners tell us that three men were violently beheaded; another was burned alive in his house. Armed with knives and guns, eight to 10 men from the Islamic terrorist group East Indonesia Mujahidin (MIT) entered the village around 8 am. They torched and destroyed six other homes, a makeshift church and a Salvation Army outpost—leaving 13 families grieving and traumatized in Lemban Tongoa village.

Across the world’s largest Muslim-majority nation, the group has pledged allegiance to Islamic State. Survivors of the attack told our partners the men were murdered in front of their family members. In a public statement, Salvation Army General Brian Peddle reinforced the attack as religiously motivated, offering condolences to the “victims of evil” and the  “families of those whose faith have caused such harm.”

He asked for worldwide prayer for the “continuing witness of our people.”

Watch the video our partners brought back from their time with Lemban Tongoa villagers. Warning: The video and account below contain graphic details that may be difficult for some readers: 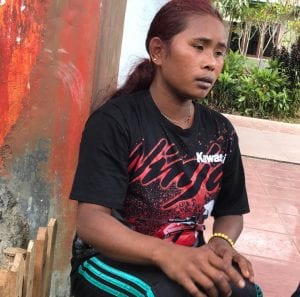 Srikandi’s father and husband were killed before her eyes.

Srikandi’s father and husband were killed right before her eyes. She shared what she saw from her kitchen when the terrorists called all of the villagers out of their houses, singling some out, including her father and husband.

“They made them get on their knees,” Srikandi said. “I saw how the man was holding my father. Then he pushed him down. And I screamed, ‘Hah! What are you doing to my father?’ Immediately, the man slit his throat with one swing and started to stab his body. While one of the terrorists did the killing, all of the men were there and watched,” she said.

The now widowed mother was still in the kitchen, standing in disbelief at what she had just seen, she heard someone shout, “Quick, run, run, run, take your children!”

“I said to my children: ‘That’s it! It’s just us now! Let’s go!’ That’s when I started running. I carried my youngest son on my hip until I couldn’t anymore. I asked my other son, “Please help carry your brother. When you get tired, I can carry him again.”

Srikandi, her sons and other villagers followed the tk river until they reached the top of a waterfall.

“We looked left, right; there was no out,” she recalls. “We were worried we’d be caught.” Then a woman in the group of three adults, said, “We have to climb along this rockface to get to the bottom.”

It was an implausible request. “But we had no choice,” Srikandi said. “I helped my children down. Then we ran until we reached a road.”

‘Our presence is making a difference’

When Open Doors’ Southeast Asia team heard about the attack and dire situation, they quickly mobilized and traveled to the area be present with the community and provide much-needed support. Our team attended the funerals and talked and prayed with traumatized believers.

Shortly after arriving, one local partner told us, “I see sadness in the eyes of the villagers. There is a lot of emptiness in the Srikandi’s face. However, when they saw us, the villagers smiled.”

Sam*, one of Open Doors’ partners for Southeast Asia, noted that one of the greatest concerns and prayer needs is for the children. One boy witnessed the death of his father and has hardly spoken since. “We need to help them overcome this trauma,” he says, adding that his team on the ground is listening to the stories and will investigate how this community can be best helped.

So far, Open Doors has been the only ones from outside Indonesia to visit the village, Sam reports. Being there to sit face-to-face with traumatized Christians paints a beautiful picture of the Church being the hands and feet of Christ in times of crisis and need.

Says Sam: “Our presence is making a difference.”

Step into the lives of persecuted believers

Right now as you read this, Christians in more than 50 countries are facing difficult trials, even attacks— simply because they follow Jesus. Join the largest on-the-ground network serving persecuted Christians and partner with us to strengthen the church in places like Indonesia, Nigeria, Iran, North Korea, India and beyond.

‘I fell on my knees’—340+ million Christians risk persecution