The incredible courage of Christians in Iran

The coronavirus came early to Iran, and it hit hard: Hundreds of thousands of people were infected and, according to official numbers, more than 20,000 people have died.

But those official numbers are likely a massive undercount. The BBC was recently sent secret Iranian government data by an unknown source. That data shows there are actually more than 450,000 people infected with COVID-19 and more than 42,000 deaths. That only includes data up until July 20, so the actual numbers are likely even higher.

Iran’s government is clearly trying to lessen the actual impact of the coronavirus pandemic. The government is already under tremendous pressure for its violence against protestors who were protesting gas prices, and then its actions in the aftermath of Iran’s accidental shooting down of a passenger jet. “The situation is not good at all,” reports a believer. “Inflation is so high that people cannot afford to buy meat, poultry or even fruit, and they have started to consume more beans.”

Life in Iran was already hard before COVID-19, but the pandemic has dragged the country into an even deeper economic crisis. “There is an increase in illegal activities to make money,” a leader overseeing several groups reports. “Women are increasingly forced into the Islamic practice of ‘temporary marriage’ in exchange for money to support their family, a legal practice threatening some Christians who live in Islamic families too.” 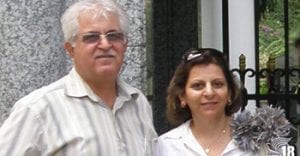 Even as it disguises the true number of sick, embattled Iranian President Hassan Rouhani admitted that “25 million” Iranians may have been infected by COVID-19. The church, largely operating underground, has not been spared by the coronavirus pandemic. Despite that fact that some Christians were released from prison when COVID-19 first began impacting Iran, more recently Christians—like Pastor Victor Bet-Tamraz and his wife, Shamiram Issavi, pictured on the left—have been arrested or sentenced to years in jail, just for following Jesus.

The sense of hopelessness and fatigue present in Iran has not bypassed Christians. “I see spiritual attacks happening,” says a leader in the region. “And while some are actively reaching out to those in need, others don’t feel they have the strength to do so.”

The courage to be the Church

But, incredibly, by the power of the Holy Spirit, Iranian Christians continue to minister to hurting people. The Iranian church has had to quickly adjust to the reality of COVID-19—and, like all Christians around the world, have had to find creative ways to have fellowship. Despite the constant threat of prison, the underground church is shining brightly. From their own means, and with the money given to them by you through partners, they share their food and sanitary items with their community. 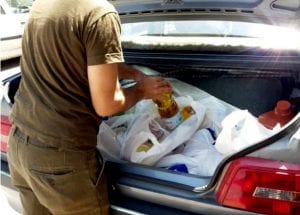 Those engaged in providing relief report the blessings it brings them. A pastor wrote us a handwritten note through a partner. He writes: “Many non-believing family members of Christians have changed their views towards the church during this pandemic. They were amazed to see how the church was taking care of the needy.”

“People were astonished when we gave them the food,” says another believer in an email. “They praised God with thanksgiving psalms, crying, hugging and shouting. I can boldly say that for all of them the relief package was a big blessing and God had guided us to the right people.”

Another believer reached out to her church leader over the phone, overwhelmed with happiness: “We went to [give] food today, there were people who obviously were so needy; they thanked us so much. They were so happy!

“There were two children who were very weak and sick because they hadn’t been eating well. And there were some old people; one of them was blind. And they couldn’t believe [we gave them] so much food, because they hadn’t had such an amount of food since the start of the crisis. I thanked God for this work. I will never forget the happiness of these people today. And truly, glory be to the Lord.”

The Iranian Christians also learned about themselves—and God’s love for them. “They learned that they are called to help in dark times and doing so encouraged them and made them joyful,” one believer says.

Another leader adds: “In quarantine, our hearts were drawn even nearer to the heart of the Father. The church had a spiritual awakening, despite its weakness.”

An additional blessing several church leaders reported is church growth. A pastor writes: “We thank the Lord that, in these days of quarantine, the kingdom of the Lord has increased even more than before!

“Even though we were in quarantine, God prepared the hearts of people and, as we talked to those people, they became believers.”

Help your brothers and sisters

Throughout the world, Christians are in desperate need of food and basic aid during the COVID-19 pandemic—but you can give them the help they need! Join the largest on-the-ground organization serving God’s people in 60+ countries for 65 years.

Showing the love of Jesus to everyone—no exceptions

The relief (an example is shown below) is given to whoever needs it: Muslim, Christian or atheist. A church leader reports how a poor Christian family got a food package as well, but when they heard about the financial struggles of their neighbor, they decided to give half of the pack to their neighbor’s family. The neighbor asked them how it was possible for them to be so generous in these dark days. They told him that it wasn’t them helping him, but that it was Christ that helped this neighbor through them. 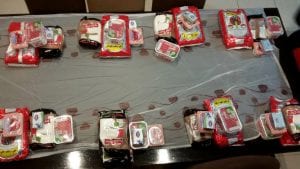 The poor family wasn’t unique in being able to show Christ through this relief. One church leader shared how the non-believing family members of believers are encouraged by the package. A 17-year-old boy said: “I had almost reached the point to say the world is absolutely dark, but now I see there are still some good people with good hearts living in this world and they are Christians!”

The daughter of another church member said: “If this is the God who thinks about and takes care of His children then I would like to know Him more!”

The believers in the country don’t know who is helping them with extra funds for food packages. It would simply be too dangerous for them to know. But they do want to thank whoever made it possible to serve their community. One believer that sent a voice message says: “I thank God for his guidance in sending our friends to help us.” The believer who emailed is also thankful: “I just want you to thank your friends on our behalf for making such a wonderful moment for the Body of Christ. May our Lord bless you so much.”