The most dangerous dinners in Central Asia

If you were to turn up at Murat* and Mira’s* house in Central Asia on a Saturday night, you wouldn’t think anything unusual was going on. It looks like they’re having a big dinner party—tasty-looking dishes cover every inch of the long table, and the people sitting around it seem to be good friends. Perhaps it’s a little strange that they do this every week, with the same people, and a few of them might look a little nervous to see a stranger at the table, but Central Asia is all about hospitality and relationships; this gathering doesn’t seem all that unusual.

That is, until they hear that you are a Christian.

People start to smile, and there’s a sigh of relief from around the room. Small notebooks appear—songbooks—and someone gets out a guitar. Everyone begins to sing a song of worship to God.

And you realize, this isn’t just a dinner party—it’s a secret church meeting. 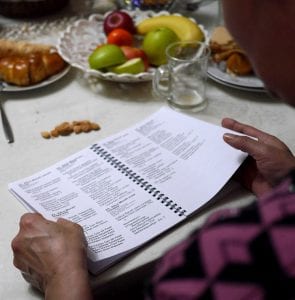 The reality of following Jesus in Central Asia

But even if they did have 50 members, it could be a huge risk to attempt to register. It might lead to church members having their homes raided in the middle of the night, or being questioned at the police station.

Why does the government want to make it so hard for churches to register? Central Asia is a majority Muslim region, and Islam is seen as part of the identity of most of the people groups here. Believers from Muslim backgrounds are considered traitors, and the Protestant churches they attend are seen as alien sects that aim to undermine the current political system. In many places in Central Asia, the government is an authoritarian system ruled by a single person or party, so control over each aspect of society is vital to the political authorities.

Because believers here face such fierce opposition, it can be almost impossible for small churches like Murat and Mira’s church to access Bibles and other Christian books and training to help them to stand strong and grow in their faith. This is where your support and prayers have helped—you have enabled Open Doors to provide Murat and Mira’s small church with the books and training they need to keep going.

But perhaps just as great is their need for assurance that they are not alone or forgotten. Sitting together around this dinner table, the believers from Murat and Mira’s church may be sitting with every other Christian they know. It can feel like they are the only ones in the whole region—but your support is helping to remind these believers that they are part of a global family.

In the photo to the left, you can see an Open Doors worker, Jan, showing a video on his phone from a group of believers in the Netherlands, encouraging the members of Murat and Mira’s church. “It was a very special moment,” he says. The believers were very encouraged to see the song that the Dutch church group sang for them.

As a response they also wanted to sing a song, which we recorded. Here is the song—it’s Psalm 23.

Church in a time of coronavirus

It’s probably no surprise to hear that this meeting took place before the outbreak of coronavirus had reached Central Asia. Many parts of the region are under lockdown, making it even harder for believers to meet together than normal.

And yet, many believers see this situation as an opportunity. “It’s great to see how the Central Asian church is reaching out with hope and light during the COVID-19 crisis,” Jan says. “The testimonies we have received show it is a resilient church that knows how to act during such a crisis—in some areas, Christians are giving out food aid and masks as a form of outreach, while others are using the internet to continue to encourage believers and reach new people with the gospel, even under lockdown.

“How did they learn to act this way? Part of the answer for some is that they received special training from Open Doors, [specifically persecution preparedness] training. This training helps to prepare believers for persecution, but the lessons it teaches are just as important during other kinds of challenges.”

Your prayers and support have helped to provide Bibles, training and encouragement to churches in Central Asia like Murat and Mira’s, enabling them keep going in the face of fierce persecution. Please continue to stand with your brothers and sisters in Central Asia.

Secret Christians in places like Central Asia often feel like they are isolated. But they aren’t—they have a global family in the Church! When you give a gift today, you remind them of that, and encourage them to continue standing strong for Christ. Will you help by supporting persecuted Christians?

Central Asia—where owning a Bible is a punishable crime

From Drug Smuggler to Bible Smuggler

In Central Asia, Women Risk It All for the Chance to Read a Bible

Tajikistan pastor surprised by early prison release—‘All these years, I felt your prayers’