‘Tomorrow is not yours’: Extreme violence meets radical faith in Nigeria

April 9, 2021 by Christopher Summers in Africa

Inside Nigeria’s northeast region lies the sprawling city of Maiduguri, the capital of Borno State. With a population of 1 million people, the century-old city is the largest in the area.

Maiduguri has always called itself the “city of peace.”

And then, Boko Haram was born. In 2002, a radical Islamist cleric founded the group, and since then the city and surrounding areas have been the place attacked most by Boko Haram.

Now, fear roams the streets; it’s chased the peace out of the city. Now, Maiduguri is known as “the birthplace of Boko Haram.”

Amina* is just one of Maiduguri’s many residents who grapples with the impact of the violence and terror the group continues to rain down on the city. She and her family bear the scars—literal and figurative—of the attacks that have come to define persecution against Christians in Nigeria.

“I thank God I knew the Bible and that the Bible didn’t hide anything (about persecution) from us… anything can happen anytime,” Amina says. “A Christian should not be afraid.”

Through the years, that deep faith has been put to the test, over and over again.

‘Tomorrow is not yours’

At one point that seems long ago, fear wasn’t part of Amina’s life. She lived with her husband, Daniel, and their five kids—four sons and one daughter. They were active church members in Maidaguri, supporting and helping others where they could. When the Boko Haram insurgency sprouted in this northeastern corner of Nigeria, leaving the area wasn’t even a thought.

But Daniel and Aminia didn’t know Boko would come to them. On October 2, 2012, the family was inside, watching TV, trying to escape the sweltering 97-degree heat that often hovers into the evening. Suddenly, they hear pounding on the gate leading to the family’s yard.

The kids tried to warn their parents and each other—but all they could do was watch as Boko Haram fighters forcibly entered their yard. Once the men were inside, it was pandemonium. The armed men began to shout instructions at the family.

“They told the boys to lie down on the floor, and I saw them bringing my husband inside,” Amina remembers. The radicals tied the men’s hands behind their backs. “They asked my husband: ‘Where are your car keys? Where are your documents? Where is your money?’ This and that … They took everything … all our documents … our clothes, even my children’s clothes.”

Then one fighter told Daniel: “Today is your day; tomorrow is not yours.”

Amina realized in horror what the men were planning. “When I heard this, I started praying, ‘God I do not want to be a widow, please help me Lord!’”

“The attackers said: ‘If you are not going to denounce Christ, we are going to kill you today.’” —Amina

Still, Daniel and his sons refused to deny Christ.

Amina’s husband died with a prayer to Jesus on his lips.

The attackers moved on to Daniel and Manga. Amina watched as they cut her sons’ throats, leaving them to die as they fled the family’s home. 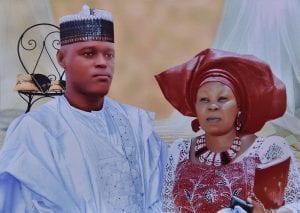 Amina and her late husband, Daniel

Frantically, Amina yelled for help. So many had already fled, but one woman came and called the police. Amina knew Daniel was dead, but she could see her sons were still alive—yet losing blood quickly.

The Lord miraculously spared Amina’s sons who were attacked. They were hospitalized for a month, and left with deep scars on their necks. Manga now says: “At first, we were shy of these scars. You know, it is something that attracts attention. But later, we came to realize it is a testimony. [The scar] is evidence of the existence of God.”

After Daniel’s death and the near-death of her sons, Amina suffered severe post-traumatic stress and depression. By God’s grace, she received trauma treatment and has slowly learned to live without her husband and be a single parent.

But Boko Haram was not done with her yet.

A new and devastating challenge

One of Amina’s sons shows the scars on his neck.

Five years after the attack on her family on June 20, 2017, Amina was traveling with 15 other people—10 women and five men—to a funeral. “We were just chatting inside the van,” Amina remembers. “Then we heard gunshots.”

It was Boko Haram again. “They started shooting the car,” Amina says. “All of us laid down on the floor of the van. I just said, ‘Jesus, Jesus, Jesus, have mercy on me! Lord, if I die today, what of my fatherless children? You promised me that I will stay with the children and that is what I know because I did not die that time, why now?’ Then I just said, ‘Lord, let Your will be done.’”

Amina remembers how she lay in silence, praying Psalm 118:17: I shall not die but live to declare the work of the Lord.

By the time the shooting stopped, the militants had killed the driver and the men in the van. Amina sustained three gunshot wounds. “After that, my mind went off, as if I was dead,” she says.

Christians like Amina are in danger throughout sub-Saharan Africa. But you can help today when you support them through a gift.

When she regained consciousness, she was in the dense Sambisa Forest, a well-known Boko Haram stronghold. In fact, the terrorist group is so entrenched there, she was able to have surgery to remove the bullets. Soon after, she discovered that some of the other women she’d been traveling with had also been kidnapped. The women spent much of the next five weeks in prayer and fasting.

In captivity, Boko Haram challenged the women to leave their faith: “They used to send their imam (Muslim teacher) to come and preach to us, and after the preaching, they would ask: ‘Who amongst you wants to denounce Christ so that we take her and give her to our people to stay with our women and have freedom?’” Amina recalls.

Bravely, the women united and repeatedly refused their captors, knowing that each refusal might mean their death.

“By His grace, we all joined our hearts [and said]: ‘We are not going to denounce Christ. For us to live is Christ, but to die is gain.’”

In captivity, Amina’s years of Bible study helped sustain her faith. “The Bible says you should teach a child the words of God when that child is small, because if that child grows up, he will not forget it,” she says. “We conducted our church services with those verses.”

But Amina admits there were times they were afraid, especially when the Nigerian armed forces increased their presence in the forest and attacked Boko Haram’s camps. “One time, a jet dropped a bomb [and] there was fire everywhere, so we became afraid,” Amina says.

Eventually, after negotiations with the government, the women were freed.

“People welcomed me [home] and were very excited,” Amina says. “I went into a room, and I knelt and prayed before I came out and I was just thanking people.

“I started singing a song: By His grace, I am alive/that is why I am singing/Jehovah saved my life.”

Once again, Open Doors was there to provide trauma counseling and walk with Amina as she returned to her life. “Open Doors has been a great help to me,” she says. “Especially the first time they called me for trauma healing. It has helped me in so many ways because a person that has gone through this trauma has so many things. There is fear, isolation, anger—but after that training all came down by His grace.”

Your support has also made it possible for Open Doors to help Amina complete construction on her house and provide her family with essential food items during COVID-19.

“You also gave me food,” she says. “It was a great help to me. I was thinking how I was going to do after this month. I had not finished paying my rent and then that food came … it is a big relief to me.

Boko Haram has forever changed Amina’s life. But through God’s provision that allowed for your support, the physical and emotional scars continue to heal in Amina and her family. Their scars have drawn them even more deeply to Christ.

“Now I only focus myself on God and my children… all these things that happened to me, it makes me come closer to Him, more and more.”

Pray with Amina, Manga and Daniel

Amina asks Christians throughout the world—her family—to pray with her and her children. She shared her specific prayers.

“I want other believers out there to help us in prayer: Pray for wisdom in my family, pray for protection and for God to continue to give us strong hearts. One may not forget what has happened, but at least you can stand strong.

“I want believers to pray for Nigeria for an end to this menace that is happening in Nigeria. Not only Boko Haram, in every state in [northern] Nigeria, nowhere is safe. I pray for God to intervene …everywhere that is having this problem. I can even extend it to the whole world that we are all not safe, but we pray to God to end all these problems.”

*Name changed to protect identity. Some quotes edited for readability

’God is alive!’—in Nigeria, this pastor finds hope in the rubble

4 widows share their stories of loss & hope in Nigeria