April 20, 2018 by Lindy Lowry in Stories of Persecution

Five days in since his first court hearing in a Turkish court, Pastor Andrew Brunson has been moved from the overcrowded prison his daughter Jacqueline Furnari called her father’s “worst nightmare” back to Buca prison in Izmir.

An Answer to Prayer

The transfer, says Andrew’s wife Norine, is an answer to prayer.

On the couple’s Facebook page a day ago, Norine posted asking for fervent prayer that Andrew be moved back to Buca where he was held before the hearing. On April 19, she wrote:

“Andrew has been moved back to the first Aliağa prison he had been in, which was a crushing blow to him. He is currently in solitary confinement. Although the judge, the embassy and even VP Pence’s office followed up on requesting that he be held at the recent Buca prison, it has not happened. PLEASE PRAY THAT HE BE MOVED BACK UNTIL THE NEXT HEARING, AND PRAY FOR MUCH NEEDED GRACE. I SAW HIM TODAY, AND HE IS NOT DOING WELL AT ALL. THIS IS A PRESSING NEED!”

On Monday, April 16, the judge ordered a continuation of the trial until May 7 and refused to release Pastor Andrew, ordering him back to the prison where he was originally jailed 18 months ago. It was there that he struggled mentally, his daughter Jacqueline said in an interview with Fox News North Carolina. ”He lost 50 pounds, he was pacing all the time, he was dealing with anxiety, depression. It was a dark place for him.” In November, Jaqueline testified to a Senate Committee on her father’s behalf:

To write and share your prayer for Pastor Brunson and his family, click here: Andrew Brunson Prayer Wall

A Servant of Jesus Christ

Pastor Andrew began his testimony saying he was a servant of Jesus Christ. His sole purpose for being in Turkey, he said, was to “make Jesus known and make disciples.”

“The truth was spoken by Andrew and the Lord’s name was glorified,” Norine wrote. “Now we would like Andrew to be set free, for the cord to be untied/loosened.”

A few days before the trial, Norine posted that she and another believer had heard from the Lord to pray for Andrew three times a day—morning, noon and evening. And to pray specifically, “that the cord around Andrew would be loosened/untied.”

“Although I don’t understand this completely,” she wrote, “the Lord gave this very clearly so I am praying it by faith. Please join by faith that what we loose on earth is loosed in Heaven.”[bctt tweet=”Please pray specifically with me that the cord around US Pastor Andrew Brunson will be loosed–and he will be back with his family . #Pray4Andrew” username=””]

In an emotional response to Monday’s outcome, Brunson told Norine in English: “I am going crazy. I love you.” Earlier that day during his testimony he tearfully told the judge: “I want to return my home. For 16 months I have been separated from my wife.” The 50-year-old pastor is facing a life sentence of 35 years in prison. 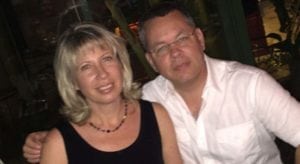 News of U.S. support and action has continued to come in almost daily since the court hearing last Monday. The most recent (as in a few hours ago) report indicates that a bipartisan group of 66 senators–two-thirds of the U.S. Senate–led by North Carolina Senator Thom Tillis is threatening Turkey with “measures” if Pastor Andrew isn’t freed. Tillis has worked with the State Department to push for Brunson’s release. He has also led a Congressional committee in addressing the imprisonment of Brunson and other U.S. citizens in Turkey. On Twitter, he said:

.@SenatorShaheen and I led a bipartisan group of 66 Senators to send a letter to the President of Turkey, @RT_Erdogan, demanding the release of wrongfully imprisoned American Pastor Andrew Brunson. #FreeAndrewBrunson #FreePastorBrunson https://t.co/kFTyzHeqgL

In a letter to Turkey President Recep Tayyip Erdogan, the senators describe the indictment detailing the allegations against the evangelical pastor as “an absurd collection of anonymous accusations, flights of fantasy, and random character assassination.”

The letter, reports NBC News, suggested that Brunson was being used as a “political pawn by elements of the Turkish government bent on destroying the longstanding partnership between two great nations.”

The letter added that the U.S. government had been “patient in the hope that justice would be done.” However, the 66 senators say they now have “concluded that other measures will be necessary to ensure that the government of Turkey respects the right of law-abiding citizens and employees of the United States to travel to, reside in, and work in Turkey without fear of persecution.”

In September, Erdogan hinted that Brunson would be returned to the U.S. if Washington extradited Pennsylvania-based cleric Fethullah Gülen whom he says led Turkey’s deadly 2016 coup attempt. Gulen continues to deny the claims. Turkey has arrested more than 50,000 people due to alleged links to the Gülen movement since the coup attempt.

Since the hearing, several U.S. government officials have used their platforms to make public statements in defense of Pastor Brunson, including President Trump.

In a Twitter post on Wednesday, President Trump commented that Pastor Brunson is “being persecuted in Turkey for no reason”:

A day after his tweet, the top U.S. diplomat for Europe, Wess Mitchell, echoed the President, telling the US House committee that Andrew is “clearly innocent” and called the charges against him “laughable.”

“The Turks claim to have a high standard of justice, the indictment suggests otherwise,” Mitchell told the US House Foreign Affairs Committee. “This is clearly an innocent man. We are watching to see if the Turks adhere to their stated standards of justice. If that does not happen, we are considering options for consequences.”

On Thursday, Senators James Lankford and Jeanne Shaheen, who signed the bipartisan letter, said they would renew their push for sanctions targeting Turkish officials. They called the charges against Brunson “fabricated” and likened his imprisonment to “hostage-taking.”

Persecuted for His Faith

Tillis, who was in Izmir for the court hearing with translators, told Fox News that “it was unlike anything he’s ever seen before.”

“He doesn’t have an opportunity to see who his accusers are; they use code names.”

The senator called the situation “illegal imprisonment,” and reiterated that Pastor Andrew is being prosecuted for his Christian faith.

Outside the court where Monday’s trial was held in Izmir.

The 62-page indictment accuses Pastor Brunson of the supposed “crime” of “Christianization,” calling it an act of terror. The day was reportedly filled with video testimony of secret prosecution witnesses whose voices and appearances were disguised.

“His cell phone happened to bounce off the same tower as someone else’s,” he said in the telephone interview with Fox News. “It wasn’t a conversation between the two. These cell towers, they catch calls from miles and miles, and somehow that was suspicious activity.”

Tillis says his next step is to meet with Vice President Mike Pence.

In addition to government officials, an American pastor the Brunsons had never met before was also at the hearing to show his support—an example, Norine said, of the favor and support they have received from the Church.

“He came there to pray and advocate and offer to take Andrew’s place in prison,” Norine said. “… He was hoping to communicate this to the judge.”

The Brunsons’ daughter Jacqueline hasn’t traveled back to Turkey since August 2017 for security reasons. She told Fox News the Turkey she grew up in with her parents as they pastored a church in Izmir is no longer the Turkey her dad is in—calling it a “changed country and dangerous place for foreigners.” Her mom, Norine, is afraid to leave Turkey, concerned she won’t be allowed back into the country.

Furnari’s observations about the country that is #31 on the World Watch List ring true as President Erdogan continues to edge closer and closer toward an authoritative regime.

This week in a televised address he announced that presidential and parliamentary elections originally scheduled for November 2019 would be held this June. The snap elections are intended to eliminate the prime minister’s job and weaken the role of parliament.

Prayer to Press In and Press On

Since his arrest in October 2016, Pastor Andrew has had limited contact with his wife and kids—a reality that has taken its toll emotionally.

“He misses my mom, he misses watching us kids grow up and transition into adulthood, get married, graduate from college,” Jaqueline said. “He’s really missing out on a lot, and he’s really heartbroken by that.” Since his imprisonment, the now 50-year-old pastor has missed his daughter’s wedding and a son’s graduation.

Both Norine and Jaqueline have expressed their gratefulness for the millions of prayers around the world for Andrew.

“All the prayer going up all over the world is also a powerful testimony to the love that exists in the family of God,” Norine wrote. “Andrew feels cut off from all fellowship, yet he has never been so surrounded by the body of Christ.”

We are so grateful to you for pressing in on his behalf.”

Jaqueline asks that people would continue to pray and not forget about her father. His next hearing is scheduled for May 7.

“I don’t want him to be suffering the way he is Turkey right now, and it’s really heartbreaking the family can’t do anything to help him right now.”

Please write and share your prayer on the Prayer Wall that Open Doors has created for Pastor Brunson and his family. You can also read the prayers and responses to prayers of hundreds of others who have “gathered” to lift up and intercede for Pastor Brunson and his family. Between our prayer wall and Facebook page, more than 1,100 believers have written and shared their prayers with the Body of Christ.

To write and share your prayer for Pastor Brunson and his family, click here: Andrew Brunson Prayer Wall