Violent attacks and COVID-19: Nigerian Christians like Rose are desperate for help

On April 7, 2020, Rose had an appointment at the clinic for a prenatal check-up. “I woke up feeling very positive and eager for the clinic visit,” she remembers. “I finished all my house chores and prepared a meal for my husband and daughters.”

Rose’s husband, Matthew, was a pastor, and the couple lived in Nbra Zongo, Plateau State with their growing family. A coronavirus-related lockdown in Plateau State had not yet happened—but would happen just a few days later—yet already Nigeria was feeling the effects of COVID-19. Other states had already locked down, and traveling between states was forbidden.

It was a strange time, but Rose’s appointment was something familiar.

She said goodbye to Matthew, then set off to see the doctor.

She didn’t know it was the last time she would ever see or speak to her husband.

Nbra Zongo is in an area of Nigeria plagued by attacks from Fulani militants. As Open Doors has demonstrated, there is often a religious dimension to these attacks, and Christian communities are often specifically targeted for destruction, violence, kidnapping and sexual assault. Churches are destroyed, homes are burned and believers are carried off, brutalized or murdered.

Because of this reality, Rose’s and Matthew’s community had established a patrol for their area. On the night of April 7, Matthew was assigned to be on that patrol. He and a secretary from their church patrolled the area, looking for any signs of a looming militant attack.

“After the patrol, my husband was on his way back home to the children when he was shot dead,” Rose recalls. Rose’s brother broke the tragic news to her while she was still away at the doctor’s. Her brother wanted her to stay with family until it was safe to return to the village, but she insisted on returning home to pay her last respects and bury Matthew.

When she arrived the next morning, she was faint with shock, but still demanded to see his body.

“Villagers brought me to the place where it happened,” she says. “I saw my husband lying dead with the grave already dug. He died a very tragic death; he was not only shot, but he was butchered. While we were waiting for the coffin to be brought, I took courage and hugged him. I whispered a prayer to him and then we had to leave. I held my daughters close and cried.”

Rose knew in that moment her life had changed forever. “Life has not been the same without him,” she says. “Now that I am alone with my kids, life has become very difficult.”

‘Sometimes we go to sleep without any food’

Even as she grieved the murder of her husband, Rose’s life was about to become even more difficult. Her in-laws accused her of being complicit in Matthew’s death by first marrying him and then not being around on the day he was killed. They came to the house, confiscated most of their livestock, their food reserves and everything else of value. They left Rose and the children behind empty-handed to fend for themselves.

And then the coronavirus lockdown happened. Survival became even more challenging for Rose and her two girls. 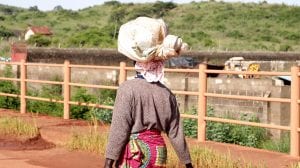 “Severe hunger came, and we had no food,” she says. “There was no money to buy any food. We couldn’t trade anything for money, because the markets were closed. I don’t even have the strength to do rigorous work to feed my children. We have just been managing ourselves. It was mango season, so we fed on the mangoes, but the season is now finished … Sometimes we go to sleep without any food. I only put my trust in God to see me through. And today we are amongst the living ones. It’s a miracle”

Rose was able to get a little help from local churches, but many of those Christian communities have been devastated by the effects of COVID-19 and quarantine. The lockdown has greatly impacted their ability to help people who are needy, and due to the loss of income, so many more needy people need help.

Plus, in the areas around Rose’s village where the government has delivered relief, Christians are often last in line, or miss out completely. “We were happy when the government announced food aid for the poor,” Rose says. “But we were left out. We received none of that food. All our hopes were dashed. I have no choice than to ration the food that we have until help comes. We still believe that help will come from somewhere.”

Rose would meditate on Psalm 119:11: “I have hidden your word in my heart, that I might not sin against you.”

“Whenever I read this Psalm, I feel so encouraged amid the situation I find myself in,” Rose says.

Right now, Christians like Rose are in desperate need of help to survive. In places like northern Nigeria, India, Vietnam and Malaysia, we’ve heard story after story of believers being denied help, just because they follow Jesus. And in the midst of the pandemic, persecution continues. Will you help these Christians today? 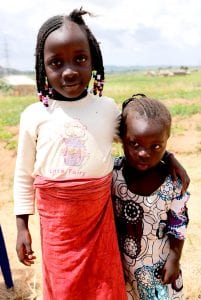 A short time later, and in desperate circumstances, Rose gave birth to another girl. Open Doors local partners knew this mother of three required urgent help. The team quickly put together a relief package and visited Rose. She looked strong and healthy, enamored with her newborn daughter. “Nagode, Allah ya yi muku Albarka,” meaning “Thank you, may God bless you,” she said after unpacking the food and other essentials we brought.

“I have never imagined that I would receive such gifts, but today, my faith in Christ has been strengthened,” Rose told our partners. “Indeed, He who watches over the widows neither sleeps nor slumbers. This support will enable me to care for family. God in Heaven will richly reward you.”

Rose is just one of the thousands of believers in desperate need of help. In Nigeria alone, Open Doors has identified more than 9,000 families who don’t know where their next meal will come from.

Please pray for the Lord’s provision in their lives and if you are able, continue to help us bring urgent relief and hope to Rose and many others like her across Africa. With your help, Open Doors can provide things like food, soap, rent assistance and spiritual support to widows and their children, Muslim-background believers, and lay leaders. Every $65 provides relief to one family for one month.

Pray for Rose and Nigerian believers: