More than 100 Congolese in the eastern region of the Democratic Republic of the Congo (DRC).

They are facts—and a story—that we must pay attention to in the Central African country of 86.7 million, says Illia Djadi, Open Doors’ senior analyst for freedom of religion or belief in Sub-Saharan Africa. “The killing of innocent civilians on an almost daily basis is an underreported tragedy.” Since Dec. 31, more than 100 people have died.

Because the DRC is 95 percent Christian, the majority of these deaths are believers, Djadi said.

“These predominantly Christian communities are attacked by an Islamic extremist group with a clear Islamic expansionist agenda.”

The DRC is No. 40 on Open Doors’ World Watch List of the 50 countries where it is most difficult to live as a Christian, entering the list this year for the first time.

Stand with Christians under attack for their faith

In more that 60 countries, the church is under attack. Open Doors is committed to serving and standing with these believers who are killed because they follow Jesus. Will you join us? When you do, you become part of the largest on-the-ground network serving the persecuted church—joining God where He is working ... and where His name is being proclaimed to the ends of the earth. 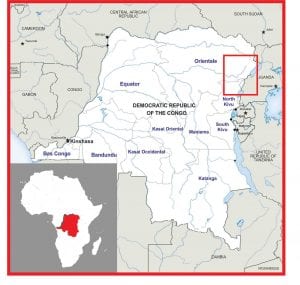 ‘A war has been declared’

Observers say the number of attacks attributed to ADF has been increasing in number and intensity since the start of an army offensive against the group in October 2019. A local citizens group called Lucha suggests that more than 1,200 civilians have since been killed by the militant Islamic group [RFI].

“A war has been declared against the DRC,” provincial Gov. Carly Nzanzu Kasivita told RFI after the reported killing of seven civilians in another attack on Dec. 30. A “national and international mobilization” is needed to end the ongoing violence, he said.

The Allied Democratic Forces, also known as Muslim Defence International, have been attacking communities for decades, including killing and kidnapping Christians, and training and sending jihadists to other countries in Africa.

A Jihadist network across Africa

Last year, a UN report suggested the “widespread, systematic and extremely brutal” rights abuses by the ADF “could constitute, by their nature and scope, crimes against humanity and war crimes.”

The UN warns that the ADF is actually connected to a network of jihadist groups across Africa. UN Secretary General, Antonio Guterres told RFI, “In my opinion, the ADF today is part of a network that starts in Libya and stretches to the Sahel, to the Lake Chad region, and which is present in Mozambique.”

The ADF has not formally linked itself with Islamic State group, but Islamic State has started to claim responsibility for  some of the attacks by ADF and in April 2019 Islamic State propagandists described Congo as the “Central Africa Province of the Caliphate,” according to the SITE Intelligence Group, which monitors Islamic State announcements.

“It is a reminder of what is happening in other parts of the central Sahel region,” Open Doors’ Djadi said. “Think of groups like Boko Haram in northeast Nigeria for example. The ideology, the agenda of establishing a ‘caliphate’ in the region, and the way they operate is the same, and we can see how they afflict terrible suffering on innocent people.”

“As Open Doors, we want to raise the alarm and we urgently call on the national government and the international community to do everything they can to protect innocent lives and to restore peace in this troubled region.”

Pray with us for Congolese Christians

Father, our family in the Congo is under attack. Please be so close to those who have lost so many in these continuous attacks. Father, provide for their needs and bring them comfort in ways we could never imagine. Place people in their path who remind them of the hope they have in Christ. May they feel the prayers of those who are lifting them up around the world. God, we ask that You would thwart the actions of these extremists and that You would speak into their hearts and convict them of these violent acts. We pray against the organization of terrorist networks. God, would you confuse their plans? Lord, we pray that Your name would be glorified as we come alongside our sisters and brothers in the Congo who are walking through so much. In Your name we pray, Amen.

Church under siege in Congo—terrorist group pledges allegiance to ISIS

In Africa, Christians Are in the Flames of Persecution—and On Fire for Jesus