When following Jesus makes you homeless

November 2, 2020 by Christopher Summers in Asia

It’s a common story we hear almost every week: A Christian is targeted by their community for their faith, and verbally mocked and told to return to the beliefs of their neighbors. And then the ridicule turns violent. Villagers attack homes with tools or crude weapons and believers are forced to flee.

The reality, though, is stark. It can be hard to visualize what it means to have your home attacked.

But the pictures and videos tell the real story.

Here are five stories of God’s people who were made homeless, just because they follow Him, along with some ways you can pray with them. Even as they count the cost, these Christians continue to claim the name of Christ—I hope these stories strengthen your faith and drive you to pray for your persecuted sisters and brothers.

Asleep and attacked in India

Pastor Udhav Pradhan’s family was asleep when extremists attacked their home in Khorlakot village in India’s Odisha state. They had been under threat for quite some time. In this village of 1,000 people, eight families are Christians, including Pastor Udhav’s and his brother’s family. They have lived there for the last 20 years but like so many Christians in India, they are now under attack from Hindu extremists who use violence to pressure Christians to leave or renounce their faith. The extremists warned Pastor Udhav’s family that if they do not leave Christianity, they would be killed or burned.

At 11 pm, while everyone was in bed, Udhav was praying. Suddenly, he smelled something burning. When he ran out of his house, he saw that part of the house was on fire. Immediately, he rushed back in to wake up his family members. He told them also to dislodge the two gas connections. He thanks God that because he was up praying, he could save himself and his family members. A First Incident Report was taken by the police but so far, no action has been taken. Below is the video Pastor Udhav filmed:

The results of rage in Laos

This picture above shows a house with a portion of its roof stripped off, walls knocked down, and pieces of furniture scattered. This was the home of a Christian family from southern Laos. This is the aftermath of the community’s rage against the family’s belief in Christ.

On October 10, at least two local officials, several military soldiers, and some villagers came and destroyed the property because the family believe in Jesus. After this, the mob moved to another house belonging to two believers; they locked it up and barricaded it, prohibiting the owners from entering their property.

Currently, these believers are temporarily taking shelter in the forest. Open Doors local partners have already provided the families with rice, clothes, blankets, and other necessities.

In another province in southern Laos, just a day after this incident, 11 believers who were having lunch after their worship service were brought to the village office for questioning. They were released on the same day. 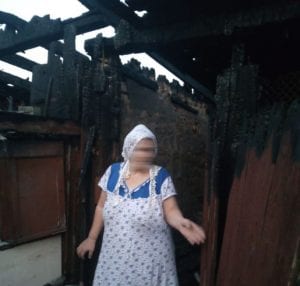 In September, the home of a Christian family in Central Asia was burned by Muslim extremists. Thankfully the family was not injured as they were not home when the fire was set. When the family returned home, they discovered their house ablaze. The fire department was able to put the fire out, but not before most of the house and property were destroyed. The fire has been ruled arson.

The attacks took place in a village located close to the border between two Central Asian countries, which we can’t name for security reasons. The family had been taunted and persecuted by their neighbors since they left Islam to follow Jesus but the persecution has clearly escalated to a dangerous degree.

Homes destroyed by relatives in Vietnam

In 2019, three families (13 people in total) from the Bru tribe in Vietnam decided to follow Jesus at a Christmas evangelism event outside their village. When they returned home, they were greeted by an angry mob. The Bru people largely practice ancestor worship, a belief intricately woven into their culture. Everyone in the community knows that when a member of the tribe changes faith, a negative, oftentimes violent reaction from the community is to be expected.

When the new believers refused to perform traditional rituals, the conflict with the villagers escalated and the Christians were forced to leave their village. You can see the results of the mob’s attack above.

Currently, the authorities hope to set up a meeting with the three families and the villagers to discuss the issue and have a consensus. An Open Doors local contact said, “The families are willing to give up all their belongings—crops and livestock—so they can now settle a new life and live peacefully as Christians.”

What it looks like when a mob attacks in India

Our partners in India recently shared this shocking footage of an angry mob of 2,000 determined to punish and intimidate 75 Christian converts in their village of Singanpur in Chhatisgarh state. Many believers were severely beaten.

This is what Christian persecution looks like today in parts of India. It’s often mob-fueled and violent. You’re seeing it in action. Please watch and pray with these families—your family in Christ.

A home knocked down in Laos

This is what’s left of Pastor Inpong’s* home in northern Laos.

He showed us what happened when a mob of villagers armed themselves with hammers, sticks and illegal handmade guns—bent on sending a message to him and anyone else who left their tribe’s gods to follow Jesus.

This is the risk our brothers and sisters take to follow Jesus. Pastor Inpong has asked for our prayers.