That verbal commitment from North Korea President Kim Jong Un and a plan for a second Trump-Kim summit make up the main headlines coming out of Sunday’s talks between U.S. Secretary of State Mike Pompeo and the ruling Kim in Pyongyang.

While the move toward denuclearization is a step in the right direction, little has been said (and publicized) about the country’s decades-long severe human rights violations in these conversations with North Korea. Kim’s loose promise begs other critical and important questions: When will Kim Jong Un be ready to open up the widely reported network of North Korea’s infamous prison camps for inspection? When will he be ready to allow the Red Cross and the United Nations Council of Inquiry to go into and inspect these camps where 250,000 North Koreans suffer—50,000 of which are imprisoned for their faith? How can a dictator who uses the fear of Nazi-style prison camps to rule his people sincerely extend a visit to the Pope?

“We must gain transparency into how these people are being treated,” says Open Doors CEO David Curry. “And then President Trump must make it clear that Kim Jong Un can only be invited back into the world’s good graces, and be lauded for political gestures if he commits to resolving decades of human rights violations at the hands of his regime.”

U.S. Secretary of State Mike Pompeo recently met with Kim Jong Un to prep the next summit between President Trump and the North Korean leader.

Accounts and stories of ex-prisoners in North Korea are sobering reminders of the darkness and brutality. A 2017 report by the International Bar Association War Committee offers gut-wrenching details from personal testimonies, video, transcripts and scholarly works about the state of North Korea’s prison camps.

One of the judges, a former child survivor of the notorious concentration camp in Auschwitz, said the conditions in North Korea were as bad—or even worse—than what he experienced in the Nazi concentration camp.

The recent War Committee report shares stories of routine public executions carried out in front of both children and adults designed to “subdue the prison population.” In another account, the prison guards executed starving prisoners “found digging for edible plants on a mountainside.”

Kenneth Bae, a missionary imprisoned in a camp and later released, described working long hours manually tilling rocky soil in a field. Bae would routinely lose dozens of pounds, be sent to hospitals to recover, and then be sent back to the camps.

And for Americans, one of the most notable examples of North Korea’s inhumane treatment of prisoners is Otto Warmbier, an American student from Cincinnati unjustly imprisoned for 18 months on trumped-up charges—a pattern under Kim Jong-un’s rule. Warmbier died last year—only days after being medically evacuated from a North Korean prison. His father, Fred Warmbier, has said that essentially, North Korea sent his son home in a body bag. Otto’s death serves as a disturbing reflection of Kim’s disregard for human life and human rights that continues to characterize and define the communist country.

A women’s prison at the border of North Korea and Dandong, China.

The abuses, injustices and severe mistreatment endured in the North Korean prison system are difficult to wrap our heads around. But they are a daily reality for an estimated 250,000 North Koreans held in prison camps—a reality that’s happening right now, at this very moment.

While I am thankful for President Trump’s recent efforts to free American citizens Kim Hak-song, Kim Sang-duk and Kim Dong Chul from imprisonment in North Korea (two were Christian professors from North Korea’s only private university) and American Josh Holt held in Venezuela, as well as his and U.S. government leaders’ engagement in the efforts to free U.S. pastor Andrew Brunson from prison in Turkey, we can’t stop here.

The lives of thousands of mothers, fathers, sisters, brothers and children heavily depend on leaders’ decisions to not look away and instead initiate the conversation to confront these daily atrocities.

Open Doors’ Curry reminds us that the United States has a unique opportunity to advocate for far more than a handful of hostages. “We must push forward to negotiate with North Korea to release all political dissidents being held across their prison system,” he says.

50,000 Christians in Prison for Their Faith in Jesus

Since the 1950s and ‘60s, the number of Christians in North Korea has diminished when—under the leadership of Kim II-Sung–70,000 Christians were killed, sent to labor camps or banished to remote areas.

Open Doors’ partners in North Korea estimate that a small number of these banished Christians are still alive, along with about 50,000 of their descendants, and that another 50,000 believers are held in prison and hard labor camps, re-education camps and detention centers.

In the communist country, Christians are seen as the enemy. “Christianity is regarded as a political crime and it is punished like one,” says John Choi, a North Korean refugee and survivor of a prison camp, arrested and jailed when he was 15.

According to the recent War Committee report, inside the camps, prisoners are often “tortured and killed on account of their religious affiliation, with officials instructed ‘to wipe out the seed of [Christian] reactionaries.’”

In one especially heinous account, guards killed a prisoner’s newborn baby by feeding it to the guard dogs.

“Many Christians do not survive,” Choi told Open Doors’ Sarah Cunningham. “They are tortured and used to test biological and chemical weapons—a VX gas like the kind used to assassinate Kim Jong-un’s half-brother.

“Christian women who become pregnant are especially targeted for this type of torture. It’s because they possess or read the Bible that they perish in this severe way,” he said. Under Kim’s rule, “Christians literally have to choose between life and death.”

Describing her detention, a North Korean believer/prison camp survivor echoes Choi’s observations and experience. She was forced to strip down for a cavity search, then placed in solitary confinement, a room just large enough for a single person to lie down, because of her faith. Pregnant prisoners were taken away for abortions, she said. After violent interrogations, prisoners in labor camps continue to face physical and emotional torment. They work 12-hour shifts, receive a few hundred grams of food a day, and are not permitted to bathe themselves.

Another former prisoner shares her experience: “My parents were secret Christians,” she said, “and when we were discovered, we were forcibly moved to a camp and accused of being a rebellious Christian family.

“The fact that our family did not deny our faith was the only reason that we were not allowed to see, speak, or go anywhere. We had to live long years and suffer from the hardest labors.” 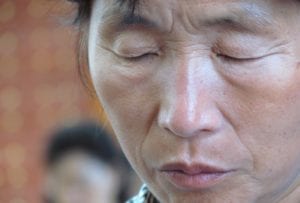 Praying and Fasting for God’s Unseen Hand to Move

Open Doors Founder Brother Andrew has seen a lifetime of answered prayers, both in small and large, eternity-altering ways. He reminds us that, “our prayers can go where we cannot … there are no borders, no prison walls, no doors that are closed to us when we pray.”

The thought of 50,000 North Korean believers imprisoned for their faith being freed from the gates of these camps and their inhumane living conditions should drive the world’s 2.2 billion Christians to their knees. We have a biblical responsibility to intercede for these believers and ask God to make it clear to our leaders that the time is now—for such a time as this—to start this unprecedented freedom work for His suffering people.

The picture of an underground church of 300,000 Christians worshiping Christ together and openly reading the Bible should compel us to do all we can—what we are called to do—asking God to remove the scales from the eyes of Kim and his regime like He did 2,000 years ago days after a Kingdom-advancing encounter on a dirt road toward Damascus. We can pray for God’s Kingdom to expand on the northern part of the Korean peninsula like never before in history.

I can’t help but think that these landmark meetings provide historic opportunities to address these decades of abuse and set a course in motion for a new North Korea—and a better tomorrow for God’s people. It also affords us the chance to join God in what He is doing through prayer and fasting.

As the Body of Christ that both suffers and rejoices with our persecuted family (1 Cor. 12:26), our support for Christians in North Korea is critical to the life and growth of the underground church. We can’t afford to neglect these moments.