10 Powerful Prayers for Believers’ Healing and Future After Islamic State

As news of the brutality began to surface, millions of Christians around the world (you were likely one of them) mobilized to pray for believers in the Middle East. These areas are close to the hearts of Christians all over the world—they’re two of the first places touched by the gospel after Jesus’ ministry on Earth. And churches there have existed since then.

Three years later, we’re encouraged by the progress, overwhelmed by the continuing needs and amazed by God’s faithfulness. Christians are returning to their homes and beginning to rebuild. There’s still a lot of work to do. And yet, we’ve seen God help His people in the Middle East in countless ways.

In the midst of ISIS-destroyed churches and streets, the church is rising up from the literal rubble, praising and thanking Jesus.

Could that be anything but God at work?

We know that God’s work in Iraq and Syria is not done yet—and we also know He has already begun that work. One powerful way you can make a difference in this region is through prayer. Below are 10 powerful prayers that will help you get a glimpse of the daily challenges and joys our brothers and sisters in Iraq experience. If you’d like more, we encourage you to download our prayer journal, 40 Days of Prayer for the Middle East. 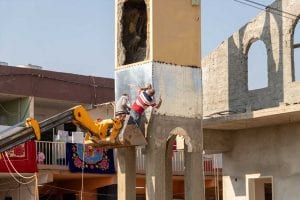 Workers building and constructing the bell tower of this newly erected church in Qaraqosh. The tower is modeled after how one of the destroyed churches would have looked like.

Pray for job opportunities for the unemployed in the Nineveh Plains in northern Iraq. Since the war, Christians have lost their jobs and their businesses. After returning to the devastated area, they need to start new projects to revive the economy, restore life and provide a decent standard of living for their families.

Pray for Syrian children. Many have been relatively isolated and are just getting a taste of newfound safety. Pray specifically for 10-year-old Jamal and 14-year-old Nadia from Damascus. Jamal’s injured leg needs healing so he can play with other children again, while Nadia is still recovering emotionally and psychologically from the war.

Pray for the financial support of hospitals in the Nineveh Plains. In the past two years, tens of thousands of Christians have returned to their villages following the liberation from ISIS. They are now suffering from a lack of medical services, hospitals, specialized care and medical equipment. In cases of an emergency, people are not yet able to go to Mosul, a nearby smaller city, so they must travel to Erbil—a larger, but more distant city—to find a hospital. The people in the Nineveh Plains are appealing to international and humanitarian organizations to provide them with hospitals, particularly with regards to emergency services.

Pray for believers in the Christian villages in the Nineveh Plains who are struggling with their daily lives. Before the occupation of ISIS in 2014, local governments had started to overhaul the sewer system. The building work then had to be abandoned when ISIS came, leaving holes in the streets. Many streets still have no pavement, and the situation is getting worse as heavy rains make the streets muddy and difficult to pass. The destruction of the infrastructure means that basic services still are not functioning. It will require prolonged and expensive work to get the streets and sewer system restored.

Pray for the minority Christian community of Mosul in Iraq where churches were destroyed during the years of ISIS’s occupation. The history of the church in Mosul goes back to the early ages of Christianity. Pray for the reconstruction of these churches so they can resume worship services, allowing Christians to gather again. Only a small number of Christians have returned to Mosul so far. Pray that Christianity in Mosul will not end.

Many Iraqi Christians hope for an end to all the religious, ethnic and political conflicts in Iraq—today, join them in prayer for that hope. All of these conflicts make it difficult to agree upon important positions in the Iraqi government, from national to local and regional levels. Pray those positions will be filled with the right people for greater stability in the country.

Pray for displaced people to have all their needs met in both Iraq and Syria, and Iraqis and Syrians who have had to flee to nearby or far away countries. Pray for those who have been moved from areas because of pressure from the Kurdish majority and previous ISIS-related occupation. Pray for priests and other church leaders, such as Father Afram from Hasakah, and for the continued strength of Open Doors staff as they provide for them.

Pray for those debating the heart-wrenching decision between staying or leaving their homes to receive clear answers from God. Pray in particular for a couple, Nadine* and Raymond*, who have just recently and painfully come to the decision that God is calling them to serve the church outside of Syria. Pray they will find peace and joy together in their new move and in serving the immigrants in their next church.

Thank God for those who recently came to faith in Jesus in Iraq. Pray for spiritual maturity for those who are hungry to learn more about Jesus and the Bible. Recently, about 20 Iraqi Muslims became followers of Jesus and were baptized. Pray for their protection; they are certain to face serious challenges in their community.

Open Doors is in the middle of a seven-year prayer campaign for the church in the Middle East #Hope4ME. We’d love for you to pray with us. Each month, you can download monthly prayer requests from Iraqi and Syrian believers.

Top photo: An Iraqi boy sits behind his desk at Saint Joseph Elementary, a private school in Qaraqosh, run by with Open Doors’ support through local partners.

The best way to stand with persecuted Christians

‘This suffering is a blessing’: A message from inside North Korea