Pray With 13 Churches Attacked by Mob in Ethiopia

The attacks started at 10 a.m. on Feb. 10, 2019, when a mob carrying sticks, stones and fuel targeted the first church building. The crowd then moved from church to church in the Southern Ethiopia town of Alaba, destroying buildings and belongings.

In the end, the attacks in the town (located two hours southwest of the capital city, Addis Ababa), injured 26 Christians, including four church workers, who required hospital care. The mob managed to severely damage 13 buildings, 14 motorcycles and an unknown number of bicycles belonging to different congregations, along with Bibles and furniture.

Witnesses said they could hear the crowd shouting things like, “Alahu Akubar (“Alah is greater”) and “Alaba belongs to Islam.” 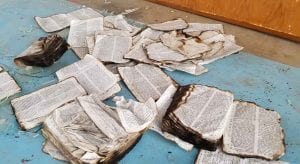 Sources said the attack was in response to the alleged call to Muslims to attack local Christians after fake reports circulated that Christians in a nearby town burned down a mosque and murdered an imam. Local Christians said they believe that although the false rumor provided an excuse for the attack, the real reason behind it is growing anger over the church’s evangelism activities in Alaba, where Muslims form the overwhelming majority. Ethiopia is No. 28 on the World Watch List.

The absence of protection from local police forces contributed to the chaos. Witnesses observed that officers stood around, watching the attacks. It was three hours before federal police intervened and restored order.

Following the incident, federal police arrested more than 100 suspects; all have been released. After the attacks, evangelical church leaders traveled to the regional capital, Awassa, to appeal for protection from authorities there.

Praying for the Church in Alaba and Ethiopia

When Open Doors teams arrived in Alaba, they found believers still in a state of shock and traumatized over the widespread violence against them. Our team gathered area church leaders who openly shared about the attacks. Many believers and leaders stood there crying.

“But it is not all without hope,” one church leader told us. ‘This incident strengthened our fellowship. I praise God. Before the attack, we didn’t have strong fellowship, but this incident has brought us together.’”

Another injured evangelist said, “I thank God for this incident. We shared the real life of Jesus and His apostles.”

Church leaders thanked the Open Doors team for their presence: “We all have been experiencing fear and discouragement. Your presence here, more than any other support, is helping us to overcome fear.’”