A young Kyrgyzstan man and his family are paying a high price for their decision to leave Islam and live for Christ.

Eldos Satar Uluu, 25, was home alone when three men broke into his uncle’s home. A neighbor shares what happened next:

“They began hitting him and kicking him until he fell on the floor,” he said. “They shouted at him that he is a kafir (infidel) and that he had betrayed Islam. Then they kicked his head, breaking several of his front teeth and his jaw bone.”

When the men realized Eldos was half-conscious and could not move, they put him on a table and washed the blood off his face, the neighbor said. Then they threatened that they would come back to kill him if he had not left the village by morning. Eldos and his family are well-known as Christians in the community.

“Some in the village do not like this,” this neighbor explained.

Threats Continue Even in Hospital 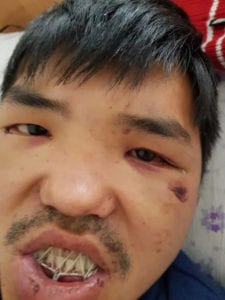 Eldos Satar Uluu was beaten and hospitalized for his decision to follow Jesus in Kyrgyzstan.

Thankfully, Eldos survived the attack but is still hospitalized following multiple surgeries. Recovery will take time. Currently, he has a feeding tube and will be able to chew food only after several months.

In an unexpected twist, one of Eldos’ attackers came to the hospital to try and persuade him and his family to drop their complaint to authorities. The man threatened to kill him if he didn’t comply. When they refused, the attacker left them with a stern message: “Think about your future in the village. You will have to live with us in the same village.” To make matters worse, Open Doors has learned Muslim relatives are also coming to the hospital to force him to recant his testimony about the attack.

Only after the hospital threats did police officers take two of the attackers into custody. However, police have claimed to local media that the attack was “hooliganism.” They said Eldos was allegedly listening to loud music, which instigated the attack—not religious reasons.

The case is currently at a standstill, said Elodos’ lawyer Zhanar Askar Kyzy. “The law-enforcement agencies are not investigating the case [any] more,” he said. “Eldos is in [the] hospital, and his  attackers are in freedom.”

In addition to his physical injuries, Eldos is also suffering from post-traumatic panic attacks. The assault and threats have taken their toll on his family as well. His sister, Aygul*, witnessed the attack. At the time, she was six months pregnant. Tragically, she suffered a miscarriage, which her doctors attribute to the trauma she has experienced. She is grieving deeply.

‘I AM STILL ALIVE BECAUSE OF PRAYERS’

Eldos believes in the power of prayer to the God he risks his life to follow each day.

“I am still alive because of prayers of many people,” he said. “I can feel it.”

Please pray with Eldos and his family:

We have the opportunity to come alongside Eldos and his sister Aygul by writing and sending them digital letters of encouragement and support–letting them know their global church family is lifting up their name and situation to Jesus.

While Kyrgyzstan is not on the 2018 World Watch List, Christians there still face persecution. As in many other Central Asian countries, Kyrgyzstan has a special government body to supervise (and restrict) religion. Religious groups must register every year, and all religious literature and materials must be approved before they can be produced, imported or distributed. In 2009, Kyrgyzstan introduced a law stating that a church must have at least 200 members to register; but very few churches in the Muslim-majority country have enough members. No religious activities beyond state-run and state-controlled institutions are allowed.

Open Doors provides immediate aid to Central Asian believers when they are placed imprisoned, shunned and excommunicated from their families and communities, and deprived of livelihood and employment because of their faith in Christ. We also strengthen the persecuted church in Central Asia through literature distribution, training, and projects to help believers start small businesses.